A British icon is reborn in the shape of the PicoBook Pro - we take a brief look at the new netbook on the block. 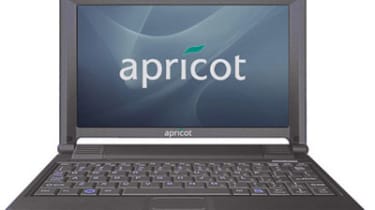 In the past few months, netbooks have started to pop up nearly everywhere, with virtually every major manufacture offering their take on what Asus started with the Eee PC. As such, the announcement of each one has been getting slightly less interesting than the last.

Therefore, our ears pricked up when we heard that computer manufacturer Apricot was being resurrected and would be releasing a NetBook as its initial product. Apricot was a highly innovative British computer maker of yesteryear, so one would hope that a netbook bearing its name would be something interesting. This is indeed how it turns out, though perhaps not for the reasons that it would have liked.

The Apricot website refers to the PicoBook Pro, for such is it called, as a masterpiece - we're not so sure. (Confusingly, the box has a picture of the netbook, but is labelled Mini-note, which is what HP calls its netbook. This is not the same machine).

As you take it out of the box impressions were quite good the lid has a shiny piano black finish for a start. However, you'll quickly find that it's a demon for picking up really noticeable fingermarks.

The netbook is light at less than a kilogram, but at 38.7mm deep it's not particularly thin. The glossy finish doesn't extend to the battery, which you notice when it's closed and when opened, the finish is a dull matt coloured plastic.

Now while we're of course more concerned with the performance and usability of a device that just how it look, once opened you'll find that the Apricot is really no looker. The 8.9in display has a large angular bezel and the speaker grilles set next to the hinges are pretty terrible.

Spec wise, the Apricot is powered by the less fashionable Via C7- processor. The original Eee PC used an Intel Celeron processer and since then everyone has jumped onto the Atom bandwagon. We didn't have time to gain any impression of battery life so we'll have to return to that another time.

You'll find a USB port on either side, a VGA out on the left and a Ethernet port of the right. Headphone and microphone sockets are located on the front, as is an SD card slot, which is a convenient location. However, when I plugged in my headphones with the machine plugged into its power supply, I found that there was a loud and persistent buzzing, which didn't bode well for build quality.

Booting the machine up and you'll be confronted with Suse Linux, which even for the more technically minded is well, slightly geeky. As it booted for the first time, it asked for a couple of passwords to set things up. As it was a test unit that would be passed onto others, I kept the password basic and simple- and the OS complained at the simple word I had chosen.

Generally, I would say that the average user will find the full blown Linux install to be somewhat harder work than the friendly, more tailored versions of Linux that others such as Asus and MSI have gone with for their netbooks.

The first thing I naturally tried to do was connect to the company wireless network, but while the Wi-Fi detected a whole host of networks it didn't pick up the one I normally connect to the first time I had seen this. Abandoning connecting to the internet in the short time I had with the machine, I decided that I would see if I could write this First Look review on the machine, which proved to be something of a challenge.

For a start, the trackpad and mouse buttons on this machine are the smallest I have ever used. While the small trackpad is less of an issue to move across the 1,024 x 600 resolution screen, there is simply no excuse for the atrocious mouse buttons. The small plastic buttons have virtually no travel at all, are uncomfortable, and requires a firm press on the edges of each notebook to get any response at all. Very poor.

The keyboard itself is not much better, with keys that are two small and have far too much flex in them. Unforgivably, there's no shift key on the right either and in combination with the track pad buttons I quickly abandoned writing on the machine itself. I've typed faster on mobile phones.

This is a first look, rather than a full review I found myself rather bemused by the Apricot Pico Pro. It's unattractive, has dubious build quality, runs an operating system that will not appeal to many users and is all but impossible to type on.

They say that first impressions count and on that basis I can't recommend the Pico Pro. With a wealth of netbooks currently on the market, Apricot is going to have to do a lot better than this if it's to get far with this new venture.

If there’s one thing we can say about the Apricot PicoBook Pro, is that it’s no Apple. Its deficiencies in the looks department and the challenges of its Linux OS could all be forgiven were it not for the simply atrocious keyboard, and mouse buttons. With so much netbook choice on the market we’d look elsewhere.