The SASBoy offers masses of IP and FC SAN storage, in a single appliance, but is Nexsan still the undisputed champion for low cost network storage? 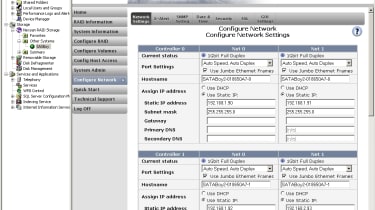 Performance over FC is impressive with the Iometer utility reporting a healthy raw read rate for one server of 366MB/sec pretty much wirespeed for 4Gbps FC connections. With the second server also running Iometer on its own volume we saw a high cumulative read throughput of 731MB/sec. To get the best IP SAN performance we found you absolutely must use Gigabit jumbo frames. Without this configured we saw our two hosts return read speeds of only 54MB/sec apiece. Using a Netgear GSM7328S switch, we configured support for an MTU of 9216 bytes and activated support on our two servers. With jumbo frames rampaging across the network we saw each host now delivering between 94-97MB/sec raw read rates.

The SASBoy supports iSCSI's MPIO feature and any host that uses Microsoft's iSCSI initiator v2 and above will have the necessary DSM (device specific module) as standard. This lets you create redundant paths to storage volumes by allowing Windows to see the same disk twice so paths from two network controllers to the same logical drive can co-exist. For the SASBoy, we mapped one volume to both data ports on one controller and placed them in different subnets. We created a failover link using both network ports on our Dell server and with Iometer fired up we were able to disconnect one network cable and watch it continue unabated.

The AutoMAID feature worked very well during testing and we set the head parking time at two minutes and spin down at fifteen minutes. We were unable to select the second option for reducing spin speed as the Hitachi disks don't support this feature. Nevertheless, after the first option came into force we saw consumption drop from 397W to 365W and after spin down this fell further to only 224W. When accessing the array from one our test hosts we could see no appreciable lag when the drives powered up ready for action.

To create the SASBoy, Nexsan has simply taken a SATABoy 2 system and replaced its drives with SAS models. These certainly made their presence felt in our performance tests and we found the AutoMAID feature can make big power savings whilst performance across the board is good.

Nexsan’s forte has always been delivering massive network storage capacities at prices few of the competition can match let alone beat. The SASBoy continues this tradition but with an eye of performance as well. It offers a fine range of features with top fault tolerance whilst performance for both FC and IP SANs is very good – just don’t forget to use jumbo frames for iSCSI.