Fujitsu Siemens is first to market with Intel’s six-core Xeon processor and sets a high standard for the rest to follow. 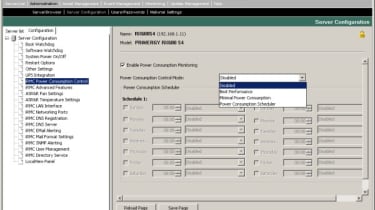 AMD's hopes may lie with its new Shanghai processor, but in the meantime Intel is heaping even more pressure on its beleagured rival with its latest Dunnington Xeons. In this exclusive review we take a closer look at Fujitsu Siemens' Primergy RX600 S4 the first quad-socket server system to market with the new six-core model. If two dozen processor cores in a single 4U rack chassis takes your fancy then read on to see what else this processing monster has to offer.

Dunnington is Intel's 7400 family of multi-core Xeon processors. It comes in as a replacement for Tigerton and will be the last of the Penryn generation. Three new six-core models are on the board and the RX600 on review came equipped with a quartet of 2.4GHz E7450 processors. Their design features 3MB of L2 cache per pair of cores and a total of 12MB of L3 cache shared across all six cores only the X7460 offers a full 16MB of shared L3 cache. You only get a 1,066MHz front-side bus but the processors fit into the same sockets as Tigerton as it's supported by the 7300 Clarksboro chipset.

For the RX600 S4, Fujitsu Siemens has taken the simple expedient of sourcing Intel's S7000FC4UR Server System solution and adding a few of its own touches. This comprises a 4U rack chassis that looks and feels very well built. Both left- and right-hand sides of the front panel are taken up by large hot-swap cooling fan modules and in between is a storage bay with room for up to eight hot-swap 2.5in. SAS or SATA SFF hard disks. Up above this is a single 5.25in. expansion bay for an optional backup tape drive.

Internally all is neat and tidy with the four E7450 modules laid out in a line at the front of the motherboard and fitted with large passive heatsinks. The price of the review system includes 16GB of memory and this is split equally across four riser cards at the rear of the chassis. The memory cards support up to eight DIMMs apiece and their layout enables the server to take advantage of the chipset's memory sparing and mirroring facilities. The former reserves the last memory bank and will use it to replace one that had encountered too many correctable errors. Memory mirroring splits available system memory in two and duplicates data across each half.

Storage is handled by an LSI based PCI-e RAID controller, which has been neatly tucked up behind the left-hand cooling fan and uses a dedicated slot on the motherboard so doesn't waste any standard expansion slots. The card comes with 512MB of cache memory and supports an optional battery backup pack. It offers a host of options for arrays and choices include RAID-6 dual redundant arrays. General expansion options are particularly good as the motherboard offers three 4X PCI-e slots and four 8X PCI-e slots and the latter are the hot-swap variety.