The director of HP Labs is looking to sharpen the focus of his researchers in the hopes of creating products, not just papers. 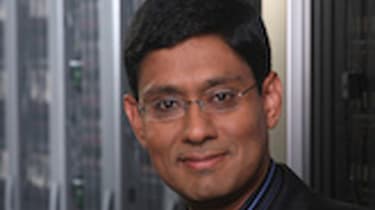 Think of it as a seriously-funded startup team. Their role is turn it into a product, do an alpha, a beta and talk to customers. We want them to show five referenceable customers.

After the research prototype is done we will invest in this so we make sure technology transfer really sticks. After one or two years, these researchers come back to HP Labs.

Sometime this technology transfer will happen to an existing business unit; we call that type a' internally. Research on next-generation inkjet printing to make it faster and cheaper would be type a'. Sometimes it will transfer to a division like the Personal System Group; that's type b'.

And then if there's something that's so creative, so disruptive that it doesn't fit within any business unit but it's still related to IT and we want to support it, that's type c. That's done under Shane Robison, the chief strategy and technology officer; he has an organisation called Corporate Ventures that funds technologies like BookPrep, where we want to bring back into print every book ever published and MagCloud for personal magazine printing. When we do basic research on digital signal processing, databases, search or whatever; the technologies we transfer there will be type c's.

A recent example is Memory Spot, that came out of Bristol Labs a wireless chip for communications and storage that we think will revolutionise way people interact but HP today does not see a business model. But we don't want to see this fantastic technology go to waste, so we're in the process of licensing to a startup company.

We do really creative things on nano-jets and very, very thin jets that were originally developed for printing. Our researchers came with on application to drug delivery. Imagine patches that will selectively control the amount of drugs delivered to you throughout the day and provide much better healthcare to patients. Now HP is not in the pharmaceutical business so should we give up on that? No, we will license it to a company in Europe.

There's a really fundamental technology called the memristor'. This is a device that was postulated 50, 60 years ago by a professor who said we have an inductor, a capacitor, a resister; if the world had this thing called the memristor that would be really interesting'.

Many people have tried doing this but with macro-scale phenomena it was very difficult to come up with devices that would have the memristor properties. By pushing at the nano-scale, our researchers came up with an actual demonstration of a memristor.

There's a couple of applications, including neural networks, neural computing. And we believe the memristor can fundamentally change the dynamics of non volatile RAM; this flash memory that we all use could be significant transformed by several orders of magnitude, in terms of size and access times and so on. In the future, say five ten years in to future, we will replace the solid state drive with, potentially, things that come out of memristors.