Five ways to get rid of your old phone

Some 77 million handsets are kicking around unused in the UK, when they could be sold, recycled or donated to charity. 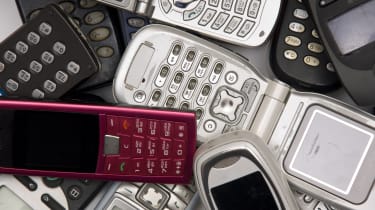 With shiny new devices appearing semmingly almost every ther day, our old mobile phones are getting chucked aside more frequently. Indeed, some 77 million phones are lying around unused in the UK, enough to pollute over three trillion litres of water, or 1 million Olympic swimming pools.

Instead of throwing them into pollutant landfills, they can be easily reused and recycled. Up to 80% of a mobile phone can be recycled -- metals and plastics can be recovered and valuable components, such as memory and circuit boards, can be reused.

But if you loathe the idea of losing an investment, you could make back some of the money locked inside an old handset. A drawer full of old mobiles could be your own personal goldmine.

To make any money though, it will need to be in a good working condition, still have the charger, and relatively new to the market, as it will typically be refurbished and resold in developing countries.

If you've just bought the latest iPhone to replace your old dead brick, you're unlikely to make any money from it -- but you could still earn some funding for a charity.

So gather up your old phones, or better yet, hold a handset amnesty and round up those belonging to friends and family, while you're at it.

But no matter what method of disposal you choose, remember to clear any personal details first you don't need the new owners dropping you a text.

If your mobile phone still works and is new enough to be in demand, you can always chuck it up on eBay. There are rules against selling a phone that's still locked into contract, however, so be sure you're not breaking any laws.

But if you're not up for the hassle of online auction houses, there are other ways. Websites such as FoneBank, Envirophone and Mobile Phone Xchange all offer cash for your old phones and some good cash too, up to 150 on some sites, if it's a high-end phone.

On Envirophone, a Nokia N95 would return 139.94, but many phones aren't worth more than a few quid.

Sell it for food

If you can't be bothered dealing with such middle-men, just head to Tesco and trade it for food. The supermarket giant which also has its own mobile service has a handset recycling service. Like the aforementioned trade-in sites, you get a different amount of money depending on the handset you have, but you're paid in vouchers for the store or airtime on their network and you get Tesco GreenClub points, too.

Pick the charity of your choice anyone from Oxfam to schools take phones for recycling, keeping the cash they make from reselling or recycling the gadget to fund their good work. If you're not sure who to send it to, Recycle Your Mobile and Recycle Appeal will handle the work for you.

Many charities will take the phone even if it no longer works, as they forward them on to companies which strip them for parts and materials. And, many take them via freepost, so you don't need to pay a thing.

If you're not bothered about making money or picking a charity, just take it back from whence it came: the shop. Most retailers run recycling schemes and donate some proceeds to charity. If your phone is too old or damaged to make any cash out of, this is one easy way to get rid of it.

Carphone Warehouse will take phones in its stores or you can request an envelope via its website to ship it. Carphone will recycle the handset and donate 10 to its own charity for every phone received.

In these dire, dire economic times, Christmas is probably going to suck. If you've splurged on a shiny new handset for yourself and are left with no cash to shop for your friends and family, just re-gift your old phone.

Okay, that sounds cheap, but with a little effort, it could be personal.

Just chuck some music on it, take a few family photos, add your phone number into the contacts and give it to your not-so-tech savvy grandmother she'll either thinks its sweet or really, really cheap. But make sure you take the drunken pics off it and add the number into your new phone so you can dodge her calls if you need to