Londoners can now take their bus and tube rants online, as Transport for London launches its own social networking site. 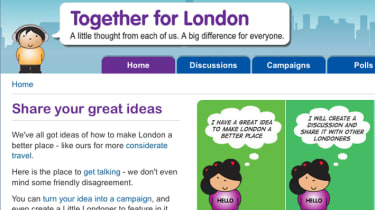 Late buses, over-crowded trains, and irritating commuters are enough to make any public transport user want to rant, but Transport for London (TfL) wants you to save your voice and do it online.

TfL has launched a new social networking site, dubbed Together for London', which features polls, discussion groups and other ways of sharing the good - and the bad - opinions about public transport in the capital.

The site also lets users create their own little avatar and campaign pledge along the lines of "I'll keep my feet off the seats" and buy t-shirts with their own slogans.

"People from all walks of life meet everyday on public transport and what's acceptable behaviour to some may irritate or make others feel uncomfortable," said Peter Hendy, transport commissioner.

"This campaign is not about crime, but about inconsiderate behaviour which fuels the disproportionate fear of crime on and around public transport in London," he added.

While the site can be used to vent or to ask for more politeness, curse-filled rage will be kept to a minimum, as it is fully moderated.

At the moment, a user named Fzub' is asking: "Would you people who use the 140 bus to Heathrow at 6:00 in the morning turn your bloody mobile phones off?"

The creatively named anotheruser' called for better braking: "I've never driven a bus but I do drive a car so am able to understand that keeping your foot on the brake whilst stuck in traffic isn't that hard."

But some users aren't so sure how useful the site will be. One user named Realistic' asks: "Do you think that the people that you are too afraid to talk to on public transport (because you want to avoid a discussion or avoid getting stabbed or punched or whatever else) would join this "hairy fairy" website?"

Social working is making its way into the enterprise, too - read our feature to find out more.