Data security is a big topic these days. We take a look at the Buffalo MiniStation PRO and Fujitsu HandyDrive 500GB, both of which are designed to keep your data safe from prying eyes. 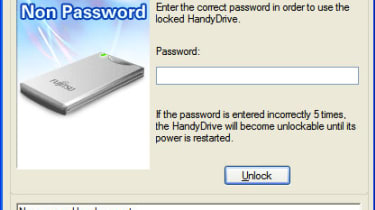 Portable storage has come on in leaps and bounds in recent years. The first USB memory key I purchased in 2002 had 256MB of capacity and cost me 55. Nowadays, less than half amount will bag you a 16GB stick.

But while solid state storage capacity and value has come on in leaps and bounds, for backing up or transporting larger capacities, a portable hard disk is still what you need.

However, if you have sensitive business information on that drive its very portability puts it at risk of falling into the wrong hands, through loss or theft. If, for example, the data on the USB key lost by an MOD employee earlier this year had been encrypted, its loss would not have been such an issue.

This is where drives we're looking at here come in, as in addition to large storage capacities both offer encryption so that should your drive fall into the wrong hands you can be sure that the contents can't easily be read.

Buffalo offers its MiniStation Pro in two capacities 160GB, and 320GB. The one we're looking at here is the lower 160GB capacity, and it has a rotational speed of 5,400rpm.

The Buffalo is the more utilitarian looking of the two drives, but clearly function has been prioritised over form though when it comes to data security, that's no bad thing. The casing feels reasonably sturdy and Buffalo says it has an inner floating structure with shock absorbers to further protect the drive. The real protection comes from the 128-bit AES hardware encryption that once a password is set-up, is used to protect all data that's written to the drive.

The oblong drive has a plastic top made up for some reason of small squares and after some days use this began to get marked and bobbled, which isn't ideal. A small/light is set into it to indicate power and disk activity.

Buffalo has placed a small ridge around the edges, with the intention that you can wrap the cable around the drive and clip it onto the other end of the USB connector. This neat touch ensures you can easily carry the cable round with you, and not have to plug it in and out either. Just the other day a colleague broke the connector of his external hard disk and had to crack it open to get at the hard disk inside to retrieve his data.

Plugging in the Buffalo to a Windows XP based laptop, the drive is detected as a mass storage device. However, initially we plugged into a USB hub plugged into our test laptop. However, the install routine failed because the non-powered hub was not delivering enough juice to the hard disk. Plugging directly into the laptop confirmed our suspicions as this time the install routine completed and it popped up as a drive letter.

What then auto pops up is the password utility, where you're prompted to create a password for the drive. It's worth filling in the hint box too, as without the correct password, there's no way of getting access to your data. After entering the incorrect password three times, the hint box becomes active, enabling you to give yourself a reminder.

Once you've entered the password, the drive then mounted as yet another drive letter and from here you can access the drive's contents. An icon also sits in the system tray giving you options over how drive loads the next time.

In our testing, copying over a single 1.36GB files to the drive took 95 seconds, and copying them back took 106. Meanwhile testing with many files, a folder consisting of 1.28GB of images, took 235 to write to the drive, and 145 seconds to write from. A good, if not spectacular performance.

In use, the Buffalo proved reliable under Windows XP and Vista and we felt comfortable throwing it in a bag and relying on it to securely and reliably transport our data.