Top 10 mobiles for work and play

So much choice, so little time... We look at the best phones to help you do your job and put a smile on your face at the same time. 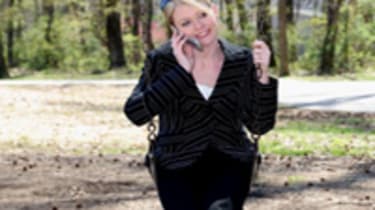 Looking out into the mobile landscape, it would seem that it's the end of the PDA and the beginning of a whole new era where smartphones merge with multimedia monsters to reign the prosumer's heart.

Whether you need something to keep track of your emails, or something to edit documents on the move, there's something out there that caters for both these needs. But all work and no play would make Jack a dull boy, so it's only natural manufacturers include some features to bring joy into your day. Here's our rundown of the top 10 handsets that merge work with the all-important play.

There's no doubt about it; the iPhone 3G is the ultimate play gadget. Not only does it feature direct links to the iTunes store, a hefty hard drive, stunning touch screen and seamless interface, but you can also download a whole host of work applications too. The iPhone 3G has one up on the original with push email and a third-party document viewer can also be downloaded. The browser is yet unmatched on other devices but a decent keyboard would be welcomed.

BlackBerry's multifunctional Bold takes business features seriously, but doesn't miss out on multimedia in the process. The Qwerty keyboard is heaps easier to use than its predecessor's SureType alternative and BlackBerry's Enterprise Server allows you to hook your email for communication on the move. There's a Facebook client, Google Maps and a few games thrown in for good measure plus a revamped browser for seamless surfing. There's also a 3.5mm headphone jack, which is quite frankly music to our ears.

Samsung's move to a Symbian handset with the S60 interface is certainly a bold move for a mostly consumer market - but the flexibility provides a major advantage. On the fun front, there's DivX support, plus an eight megapixel camera and 8GB of internal memory. GPS, 3D games and the Google Apps make this handset fantastic for play, but on the work side, there's a document viewer and editor, push email and a fantastic browser with optical joystick navigation.

It's not surprising the E66 is one of the top 10 handsets out there for work and play. The slider features a 3.2-megapixel camera with flash and auto focus. It'll record video to VGA quality at 15fps too, which isn't bad for a business-centric smartphone. Two customisable home screens mean you can switch easily between business and personal configurations, plus business software highlights include Nokia's ActiveNotes, a PDF reader, a version of QuickOffice for reading Word, Excel and PowerPoint documents, plus the all-important HSDPA.

The N96 is the most hyped up Nokia multimedia device out there. Fact. But it's no surprise because the multimedia beast boasts a five megapixel camera, 16GB of beefy storage, a huge range of video playback formats, an iPlayer application for on demand TV services on the go, plus a stunning 2.8-inch screen for watching this all on. Because it's a Symbian device using the S60 interface, the N96 naturally features a document viewer, push email service, Nokia's impressive browser and Wi-Fi connectivity for business users on the move.

The LG KC910 (Renoir) isn't the most business savvy handset, but it's LG's best. The document viewer lets you take a peek at email attachments, while easy email set up will get your business on the move in seconds. The eight megapixel camera features more photo tweaking functions than you'll ever use and video recording in VGA resolution at 30fps means you can record in slow or fast motion. GPS and Google Maps will guide you from A to B, and Dolby Mobile gives you eardrum-puncturing sound which could come in handy for drowning out the verbal blurb that normally accompanies death by PowerPoint situations.

Sony Ericsson's Windows Mobile handset could almost be a mobile office, with a Qwerty keyboard and full Windows Mobile functionality. The huge screen and optical track pad makes browsing a doddle and push email will ensure you get those all-important emails instantly. Multimedia wise, there's Windows Media player to play music and videos, plus an FM radio with RDS coupled with a 3.5mm headphone jack to while away those non-business moments.