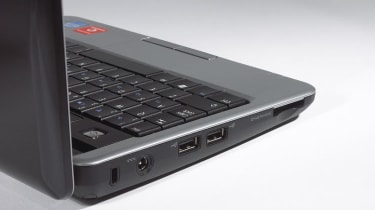 Battery life doesn't tread closely on the heels of the best netbooks - take a bow Asus' Eee PC 1000H and MSI's Wind U100 - but with four hours of light use under its cutely proportioned belt, it's not bad at all.

We managed to get just under two and half hours of usage using a combination of Wi-Fi and 3G at home, which is pretty good going considering we spent much of our time watching Heroes in iPlayer's high quality mode, steaming internet radio, checking our email and surfing the internet almost constantly.

Watching video is a pleasure, too, as the Dell's plain good looks and quality build are matched by its 8.9in display. Like most of its ilk the Mini 9 settles for a resolution of 1,024 x 600, but controversially Dell have opted for a glossy finish.

It's not as bad as it sounds, though, and thanks to the screen's ample brightness we never had any problems using the Mini 9, even under direct sunlight. On the flipside, the glossy screen bestows images with a pleasing vivacity and depth - traits that only serve to emphasise the panel's surprisingly neutral colour reproduction.

Performance isn't a high point, but it's sufficient. The Atom N270 processor is partnered with 1GB of memory, and scored a modest 0.34 in our benchmarks.

The final ingredients of any self-respecting netbook are a comfy keyboard and trackpad combination. But, like so many other netbooks before it, the Dell only delivers half the recipe. The Mini 9's trackpad is one of the best we've encountered. It's wide, accurate and blessed with two distinct buttons. Unfortunately, that's where things start to go a bit sour.

The most positive thing you can say about the Mini 9's keyboard is that it's not as bad as that of Asus' 8.9 inch Eees. It's not that Dell hasn't made a good attempt at it, either. They've gone as far as dispensing with dedicated Function keys altogether - instead relegating them to secondary FN key functions along the middle ASD row - and have done away with F11 and F12 completely.

This frees up plenty of vertical space, while leaving enough room for the fine trackpad but, unlike MSI's Wind, which takes full advantage of its wide frame by stretching the keys to the very edges, Dell has left about 10mm of fallow chassis on either side.