Intel’s Core i7 storms in 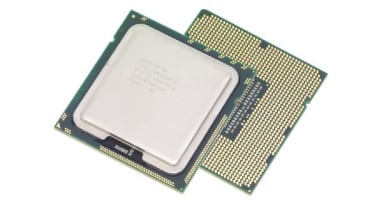 Intel's major new desktop processor design, the Core i7 has been released to hardware reviewers worldwide, and has been garnering steady praise for breaking performance records.

In the benchmarks tests of IT PRO's sister site PC Pro, a system fitted with the new processor, formerly codenamed Nehalem', achieved what it said was the, "highest score we've ever seen from any system".

Meanwhile, sister title Custom PC, referred to Core i7 as "the new Lewis Hamilton of processors" as it broke all of the magazine's previous benchmark records.

The design of the Core i7 is a significant jump for Intel as it moves from its traditional front-side bus architecture, where communication between the CPU and the memory is carried by an external chip called a northbridge, to a design where the processor contains an internal memory controller. This was pioneered first by AMD with the Athlon 64 introduced in 2003. The processor now talks to memory via QuickPath Interconnect (QPI), Intel's equivalent to AMD's HyperTransport.

The CPU is built using the same 45nm manufacturing process as the current Core 2 Duo CPU, but is the first time Intel has offered a native quad-core processor, rather than two dual-cores melded together. The four cores share a hefty pool of 8MB of Level 3 cache, which helps to boost performance.

Other technical highlights include support for DDR3 memory, the first time Intel has used the standard. This support 3-channel memory, and seeing a potential sales boost, memory manufactures have already prepared memory triple packs for sale.

"Core i7 seems to have been well received so far so we hope that triple-kits sell well too. It should be the real driver for DDR3," said Gareth Ogden, product marketing manager for memory manufacturer Corsair.

Core i7 also reintroduces Hyper-Threading, where each individual core, appear as two processors to the operating system. This first appeared with Pentium 4, but Intel says that this will be more effective that it was in its previous incarnation.

Another new feature is Dynamic Speed Technology, where the CPU can detect when a particular core is working harder than others, and temporarily boost the clock speed of that core.

The new processor is being released in three versions; the entry-level Core i7-920 running at 2.66GHz, the Core i7-940 (2.93GHz) and the unlocked' Core i7-965 Extreme. This is a part designed for the enthusiast market and is able to run overclocked' at frequencies higher than its factory rated speed, without invalidating the warranty.

The entry-level i7-920 is expected to retail for around 220 excluding VAT, when the Core i7 goes on sale on 17 November.

However, users of current PCs will have to buy new motherboards if they wish to upgrade, as the new processor requires a new slot that uses 1,366 contact pins. Intel calls the socket 'LGA1366'. The new chipset is called X58.

Mobile and server versions of the Core i7 chip are expected to arrive in 2009.