Atom-powered desktop will offer touch interactivity for simplified home, office and educational use. 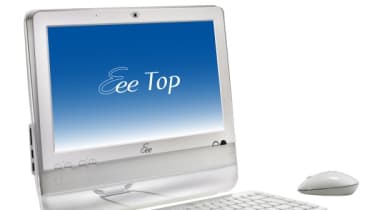 Asus has added to its extensive Eee range with the release of a touch screen computer.

The Eee Top 1602 is an all-in-one machine featuring an unusually sized 15.6 inch display. This contains five wired resistive touch panels, enabling users to interact with and manipulate on screen data.

The Top 1602 will run an Easy mode' of its Windows XP operating system, which launches a stripped down, icon-driven environment. Asus says this will make it easier to carry out simple computer tasks for the less technically proficient, in addition to benefitting education by making computing more fun for children.

Applications include Eee Memo, where users can write notes' on their desktop using their fingertips, SoftStylus, which allows text to be inputted by recognising handwriting or via a virtual keyboard, and Opera Touch, a browser enhanced for touch screen use by supporting drag and drop, widgets and speed dialling functions.

Asus says the Eee Top will retail at 382 excluding VAT.

At PDC, Microsoft recently demonstrated touch screen technology that will be integrated into Windows 7, the next version of its desktop operating system.