Apple returns, with an all-new design MacBook Pro, and it's a looker. But does it have what it takes for value and performance. 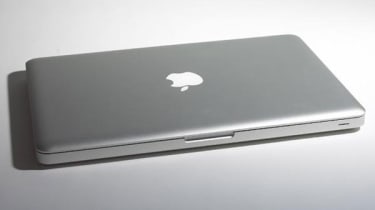 The GeForce 9400M is Nvidia's first ever integrated chipset, and it goes hand in hand with its discrete chipset, the powerful GeForce 9600M GT. If you've any interest is gaming on your downtime, then you won't find anything more demainding than the title Crysis, but the Macbook Pro copes ably, even with our challenging Medium detail test. A result of 22fps isn't astounding, but it reassures that this is one laptop that's more than capable of turning its hand to gaming at the end of a hard day's work.

And, despite the conspicuous absence of Intel's latest Centrino 2 chipset, performance is reasonably strong across the board. The Intel Core 2 Duo P8600 processor finds itself accompanied by 2GB of DDR3 memory, and it's a partnership which earns 1.17 in our application benchmarks.

It's unfortunate that our battery benchmarks only work under Windows Vista, though, as Boot Camp doesn't currently allow for swapping between the two graphics chipsets. With the GeForce 9600M GT chipset taking over graphical duties, the Macbook Pro only managed 2 hours and 20 minutes of light use battery life. Heavy usage only saw that drop to a paltry hour and eight minutes.

We expect this has got a lot to do with Nvidia's brand new chipset and immature Vista drivers, as we simulated our light usage test in OS X and found that battery life soared effortlessly over six hours.

One of the major additions to the range is the new trackpad. In its infinite wisdom, Apple has done away with the accompanying button and, instead, the whole trackpad acts as one giant mouse button.

At first it's disconcerting to find the whole trackpad sinking beneath each finger press, but we soon found ourselves acclimatising to it a little, at least in OS X.

The multitouch gestures work well under Apple's OS too, allowing easy manipulation of photos with a range of simple two fingered gestures.

New gestures have been added, though. Sweeping four fingers in an upwards motion triggers Expos; a feature which makes it startlingly easy to clear the desktop and get to the icons behind. Flicking between open programs is outstandingly nippy too. Just sweep four fingers horizontally and up pops the OS X application switcher.

It's a shame, if not much of a surprise, that the trackpad doesn't work so well under Vista. With one finger left-clicking and three fingers pressed together emulating the right click, we were soon hankering after a standard laptop trackpad and discrete buttons.

The keyboard is a little less divisive but it too is far from perfect. Its scrabble-tile layout is a common sight on Apple laptops these days, but we're not sure Apple has got it quite right here. The keyboard backlighting is a boon for working in low-light, but it's the ergonomics that come as a disappointment.