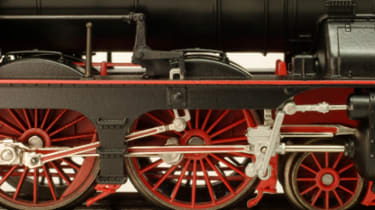 Consequently Jacobsen wrote a letter to Katzer in November 2004 asking that the decoderpro.com registration be transferred to the JMRI project, and offered reimbursement of Katzer's costs in effecting a resolution.

There was no response from Kam until March 2005, when Jacobsen received a letter from Kam's lawyers claiming that JMRI had infringed a patent 6,530,329 B2 that had been registered with the USPTO by Kam.

Jacobsen was also surprised to learn that KAM had approached his employers at University of California at Berkeley, where he teaches physics, under the Freedom of Information Act, "requesting copies of all his email and other correspondence."

The defence in a patent infringement case is that the patent describes prior art and therefore fails to fulfill the basic requirement for a valid patent. Researching prior art costs time and money, but by January 2006 and with the help of many volunteers across the internet Jacobsen was able to write to Kam's layers and point out that "multiple examples of relevant prior art [...] are available, some dating back decades. Additional prior art is available for other claims of the patent. JMRI itself is prior art, in that the implementation you now complain of was available to the public before your patent application was filed. This includes its detailed source code. Further, an examination of that code would have shown the actual performance of the method in [the claim] was not done by code I or another JMRI author wrote, but by long-existing Java RMI software from Sun Microsystems."

The patent which applied well known computing concepts such as multiplexing, asynchronous and synchronous communications and real time control to model railways was seen as yet another illustration of the flimsy evidence required to win patents.

Not only was the patent spurious, but Katzer had previously filed patent infringement suits against other products, Juergen Freiwald's TrainController and Hans-Rudi Tanner's WinLok. Freiwald and Tanner had both written to Katzer citing prior art, and the suits had been dropped, suggesting Kam's threat against JMRI should never have been issued. Furthermore, the JMRI developers claim that Katzer was aware of prior art before lodging the original patent claim.

Not unreasonably, Jacobsen began to view Kam's campaign against his project as something akin to harassment, and filed a Declaratory Judgment action in Federal Court, listing "acts of unfair competition, libel, patent fraud and misrepresentation, etc," and asking that the Court issued injunctions to prevent further infringements. On evidence from Katzer upon which the JMRI developers cast considerable doubt this complaint was dismissed.

In the meantime, Katzer compounded the injury further by not only reproducing the name and functionality of JMRI software by releasing a Decoder Commander product, but by taking "JMRI copyrighted code, stripping out the authors' names and copyright notices, converting to his own use and then distributing it as his own."

As in many such cases, it is difficult to interpret the motives for Katzer's actions, but it seems to have been assumed that a small free software project could not, and would not, offer resistance. This is, and was, a wrong assumption. Free software lives and dies by the integrity of its licenses.