Latest version of Mac desktop virtualisation application promises speed boost of up to 50 per cent and improved back up and security options. 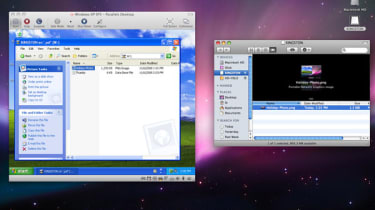 Virtualisation software maker Parallels has announced the availability of the latest version of its Mac desktop virtualisation product, which it said is up to 50 per cent faster than version three.

The application enables users to run Windows, Linux or other operating systems from within Max OS X. It is pitched against VMware's Fusion, its main rival in the Mac desktop virtualisation space.

The latest version now supports up to 8GB of RAM and 64-bit operation for every virtual machine. Other improvements include support for Direct X 9, pixel shader 2.0 and OpenGL 2.0 providing improved video performance.

Responsiveness has also been increased and the company says that it has been optimised to use 15-30 per cent fewer resources than previous versions.

Parallels now also has an eye on security and backup too and is including Kaspersky anti-virus and firewall as well as Acronis True Image Home backup.

"Parallels is committed to continuing the innovation that has resulted in Parallels Desktop for Mac winning more than 30 major awards and becoming the preferred Windows-on-Mac virtualisation product," said Serguei Beloussov, chief executive of Parallels.

"With version 4.0, we are extending our advantage by delivering a premium solution that is easy, fast and powerful with premium tools and utilities included at no extra cost."

The package for new users comes in 49.99, while the cost for those upgrading from previous versions is 31.99. However, as a special offer, until 30 November, the upgrade price is only 24.99.