Ever lost an email? That really important one you deleted a year ago? As GFI takes its Mail Archiver application to version 6, we take it for a spin. 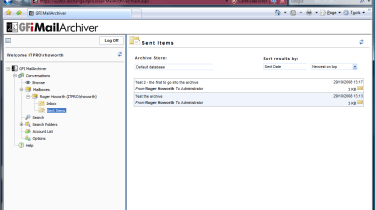 Launched in September, GFI MailArchiver 6 for Exchange keeps an archive of all the messages that pass through a Microsoft Exchange mail system. As soon as messages arrive at the Exchange server they are added to the archive, and they can be retrieved from the archive regardless of what Outlook or Exchange has done with them. Once archived, messages cannot be altered or deleted, and archives are much easier to backup, perhaps as part of a disaster recovery plan.

Some firms archive mail to comply with industry regulations or because of best practice commitments to shareholders. Others do it to minimise the amount of storage needed on their Exchange Servers. Rather than storing archived messages within Exchange, MailArchiver puts them on local NTFS storage. And unlike Exchange, MailArchiver compresses emails and stores only one copy of a message, regardless of how many people received it.

Putting messages into a proper archive also means administrators can avoid relying on messages stored on desktop PCs using the famously troublesome Outlook PST files. One of the main attractions of MailArchiver is its Outlook connector, which enables users to view their archived messages from within their Outlook folder hierarchy.

Two versions of MailArchiver 6 are available, one for Microsoft Exchange 2000 and 2003, which uses 32-bit code. A 64-bit version is available for Exchange 2007 running on Windows Server 2008 hosts. Both versions are functionally identical.

One of the new features in version 6 is scalable role based deployment, which allows the various MailArchiver functions, or roles, to be run on separate servers. For example, one role downloads emails from Exchange, another places those emails into storage, and another indexes them so they can be searched quickly. While small and medium sized businesses could probably run all the roles on a single server, larger systems may work better if the various roles are distributed across several pieces of hardware. So for example, the web interface could go on one server, indexing on another, and storage on a third.

MailArchiver is licensed per mail-enabled user in the Active Directory whose mail is being archived, so there are no additional MailArchiver license fees for using multiple servers, or for mailboxes that are not archived. A tool synchronises the MailArchiver configuration between the various role servers.

MailArchiver can be run alongside Exchange on the same server, or on one or more separate servers. It comes with the open-source Firebird database, and GFI recommends small and medium sized installations store archive metadata here and store archived messages on an NTFS file system. For larger email systems, GFI suggests using Microsoft SQL Server for the archive metadata. Microsoft SQL Server could also be used to store the archived messages, which enables MailArchiver 6's new auditing feature. This keeps track of what users have done with emails, such as whether they were printed or forwarded.