IBM’s System x3455 targets HPC and compute node duties and offers a fine hardware package in the process, but is it the best choice? 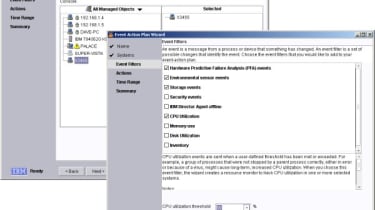 There's plenty of competition in the server compute node and clustering space as businesses and scientific establishments look for high performance systems but with value as a key priority. IBM has always had a sharp focus on this market and consequently offers a wide range of low-profile rack solutions.

The System x3455 is one member of IBM's extended family of 1U industry standard rack systems but is the only low-profile model to support AMD's processors. This latest version on review comes equipped with AMD's quad-core processors with the system supplied with a pair of 2.5GHz Opteron 2360SE modules. With a TDP of 105W apiece these aren't the most energy efficient processors but you can opt for the lower power HE models if you wish as they fit the same socket. Of course, there's also AMD's just released Shanghai but more on that later.

The server is up to the usual high standard of build quality we expect from IBM as the solid chassis exhibits very little flexing. There's not much to see at the front as you have a simple display panel showing the status of power and the hard disks plus indicators for location and errors. Two USB ports are provided alongside and you can add an internal optical drive. A bay is provided for a CD or DVD drive and it has power and interface sockets ready and waiting so you can remove the blanking plate and slip one in.

With the lid removed a tidy interior awaits where all components have been neatly laid out to maximise air flow. The two Opterons are staggered down the motherboard and mounted with chunky heatsinks whilst plastic shrouds help ensure air goes where it's needed most. Each processor socket is accompanied by a bank of six DIMM slots and the review system included a total of 8GB of DDR2 memory. Cooling is handled by a triplet of blower fans at the front and we found the x3455 to be very quiet during general operations.

Storage options are more limited as separate internal bays are provided for two 3.5in drives and filling these are 160GB Western Digital SATA hard disks. They're mounted in removable carriers behind and underneath the DVD bay and we found access slightly restricted by the close proximity of the interface and power cables. The motherboard sports a couple of SATA ports but does not provide any embedded RAID functions. For this, you need to specify IBM's ServeRAID SAS/SATA solution and our system included an LSI based PCI-e card. This comes with four internal ports and an external SFF8088 port but RAID options are limited to mirrors only, so it's not really suited to adding large arrays of fault tolerant external storage.