We liked the G1 a lot when we first encountered it, but are we as enamoured after some real quality time together? 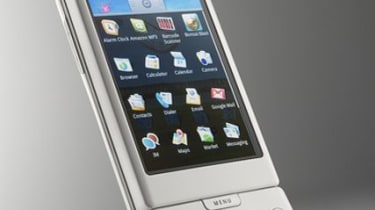 Scrolling through applications was a bit of a fine art but not in a bad way. It was almost too quick in some instances but after a process of trial and error us and the phone were singing from the same hymn sheet. After that, sweet scrolling music was made.

Where Android-based handsets, in this case the G1, really come into their own is the Android market. If what you so desire isn't already pre-installed on the device, you're highly likely to be able to find it in this bustling marketplace.

Given business users are a well-travelled bunch, we thought it apt to download a financial application from the market, but, those wanting to get away from the world of work need not despair as they will find an array of areas to choose from.

Applications in the marketplace can be perused based on their popularity rating or by the date on which they were added. Once you've selected your chosen application, a gentle tap brings up an information screen detailing what the application is, which version of the software, and how much space it'll take up on your device.

Once you're happy with that data, you just hit install and a message appears telling you what access said installation will entail (ours required full internet access) so you can choose to hit OK or to change your mind and cancel the whole darn arrangement.

After hitting OK, the aCurrency installation took about 10 seconds before it appeared in the right hand corner of our screen, first as an arrow pointing down and then a tick. We then simply dragged it down like a message and were able to start using it.

Our only gripe with this application was and this gripe extends to many applications on the device the absence of a virtual keyboard to enter currency data. Instead, we had to rely on the physical keypad.

Those who get a bit eager with their app downloads will be pleased to hear the G1 supports microSD storage and, while it's bundled with just 2GB, it's capable of supporting up to 8GB.

We found the music playing aspect of the phone both a pleasure and a bone of contention. The interface was bright and vibrant with big icons and cover art-esque visuals. However, the absence of a 3.5mm headphone jack was an irritation. Instead, the micro USB charging port doubles as a proprietary headphone jack. The bundled headphones are ugly and bulky and hurt if you have smaller than average canals and the fact that they are a one piece unit means you're stuck with them without being able to slot in your own, better looking, better fitting buds. Sigh.

Another multimedia let-down was the camera. At 3.2 megapixels we weren't expecting the moon on a stick but we didn't even get the leftovers from a cheese and pineapple hedgehog! Picture quality was not great, even in brightly lit areas, but we did like the fact that the touchscreen interface kicks in after you've snapped, offering you four icons options (save, set as, share and delete).

Given the paces we put the G1 through we didn't expect the battery to last forever, but more than a day would have been nice. We're sincerely hoping the poor battery life is just an issue with the review unit we were given.

We wavered for some time whether to give this device a 3 or 4 rating. If we were measuring the hardware alone, it's likely it wouldn't have faired so well but given we're taking into account both the G1's exterior and its inner Android OS beauty, we feel 4/6 is fair.

Ultimately, what we have with the G1 is a stunner of an OS trapped inside a bit of a plain Jane body. It won't be long before the magic wand of makeover land redresses the balance here but, with LG and Samsung planning their own Android-based devices, T-Mobile had better act fast to get a mark two version out there that is better looking than it's little sister.

The G1 got us all so excited when we realised it would be the first Android-based phone to come our way. It’s still a mighty fine piece of kit – at least under the hood – but perhaps its one that those who are particular about certain things may avoid and wait for the next Android bus to show up in Blighty.