The Roadrunner supercomputer just escapes the claws of the Jaguar this time, but IBM could lose its number one spot soon. 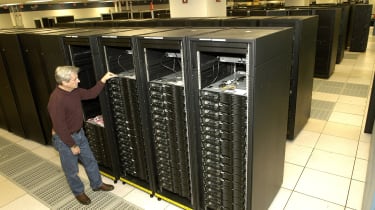 The IBM Roadrunner has kept its crown as the world's most powerful supercomputer, narrowly fending off a challenge from a Cray XT5 system called Jaguar'.

The 1.105 petaflop/s IBM supercomputer has been slightly enhanced since taking the top spot last June.

It beat the Cray XT5 supercomputer Jaguar, which was only the second to break the petaflop/s barrier, clocking in at 1.059 petaflop/s. However, it was suggested that the Jaguar may overtake Roadrunner in the near future.

Both systems are housed in national laboratories operated by the US Department of Energy.

The top British supercomputer came in at 21, an IBM Power 575 system used by the European Centre for Medium-Range Weather Forecasts (ECMWF) for weather forecast data and research.

Although IBM remained the clear leader when it came to the installed total performance of all 500 supercomputers, HP took the lead in the number of systems, with 209 as opposed to IBM's 183.

It was also good news for Intel, with 379 systems (75.8 per cent) using Intel processors - virtually unchanged from six months ago.

Top supercomputer Roadrunner was based on IBM QS22 blades built with an advanced version of the processor used in the Sony Playstation 3.

Roadrunner was also one of the most energy-efficient supercomputers, and used half the total electricity to maintain the same levels of petascale computing power as the Jaguar.

Although proud of holding on to number one spot, IBM claimed that most important was building supercomputers which advanced the global economy and society at large.

"We pioneered energy-smart supercomputer designs with Blue Gene in 2000 and built substantially on that heritage each year to the benefit of science and industry," said David Turek, vice president of deep computing at IBM, in a statement.

"We apply our lessons learned and the innovation that comes from these efforts to IBM's commercial systems business."