iQStor’s latest IP SAN appliance hits the sweet spot for value, but can it match the rest on features and scalability? 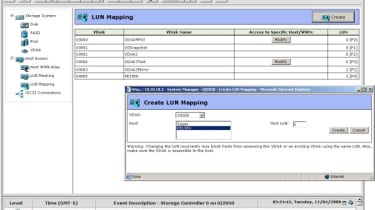 Competition in the IP SAN market for network storage is intensifying and clearly iQStor aims to beat the rest on value as its latest iQ2850 disk array delivers a number of features many other vendors will charge extra for. Standard features include services for unlimited managed snapshots and volume copies along with a DSM for MPIO fault tolerant functions.

iQStor also offers its enhanced data services, which include synchronous and asynchronous remote replication for disaster recovery, a choice selection of agents for popular databases and its SAN Manager software. The latter provides a centralised console for managing entire IP SANs and offers automated discovery, monitoring and alerting facilities.

There's a lot more to the iQ2850 as this 3U disk array is extremely well constructed with the disk drives fitted in industrial strength hot-swap carriers. These slip firmly into place in the chassis and the top panel flips down in front where it provides activity LEDs for each bay and a useful backlit LCD operator panel offering a status display and access for basic configuration. The system on review came supplied with fifteen 1TB SATA hard disks but iQStor also offers arrays for FC drives instead. However, considering SAS has all but taken over as the choice for high performance storage we would have expected these drives to be a better bet than FC models.

The array can be purchased with a single controller but we had the dual controller version with them functioning in active/active mode, enabling all four Gigabit data ports on each one to be available for host connections. Each comes with 1GB of cache memory, which can be expanded to 4GB and both are protected by a battery backup pack located in the management controller. RAID options are good as along with stripes, mirrors and RAID-5, the controllers also support dual-drive redundant RAID-6 - the Dell EqualLogic arrays, for example, only support RAID-5 and -50.

Expansion potential knocks the rest into a cocked hat as the controllers also each have a pair of 4Gbps FC ports, which accept iQStor's J2880 SBOD expansion units. These have the same number of bays as the main unit and up to fifteen can be daisy-chained from it enabling capacity to be increased massively to 240TB using 1TB SATA drives. If you wish, you can also mix FC and SATA SBOD units in the same daisy-chain as well.

We found installation a simple enough process as you point a browser at either of the controller's IP addresses to load the System Manager interface. Its home page opens with a complete graphical rundown on the condition of the drives, controllers, power supplies and fans plus the link status of each data and FC port. If you want full manual control you start by creating RAID arrays where you select an array type and pick the drives to be included. Pools come next and these can comprise one or more RAID arrays. VDisks are your iSCSI virtual volumes and you decide on a size for each one, which pool they are members of and the data port they should be assigned to.