The first round of the controversial biometric card and identity database has kicked off. 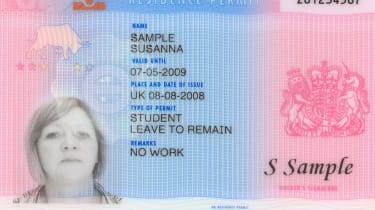 The first round of biometric identity cards at to be rolled out today, for foreigners living in the UK.

The cards will be given out to foreigners with visas such as for studying, working or marriage living in the country.

The Home Office said it expects as many as 60,000 of the controversial cards to be rolled out by the Borders Agency by March, mostly to students. It expects the majority of so-called foreign nationals to have the cards by 2015.

Starting next year, the Identity and Passport Service will begin giving out their version of the biometric ID cards to British citizens, starting with airside workers at two airports.

Home Secretary Jacqui Smith said: "In time identity cards for foreign nationals will replace paper documents and give employers a safe and secure way of checking a migrant's right to work and study in the UK."

Dominic Grieve, shadow home secretary for the Conservative party, said the system was pointless. "This is a gimmick but it's a gimmick with a price. While these 'ID cards' won't stop illegal immigration or terrorism, they will land the taxpayer with a multi-billion pound bill," he said. "At a time of economic hardship this is the last thing the taxpayer needs."

For those who disagree with the scheme, anti-ID card group NO2ID told IT PRO it plans to demonstrate against the cards at immigration centres today. In addition, the government recently launched a consultation on the cards.

Click here for a timeline of the cards' arrival in the UK.