ProWare delivers a high capacity IP SAN appliance at a remarkably low price, but is there a catch? 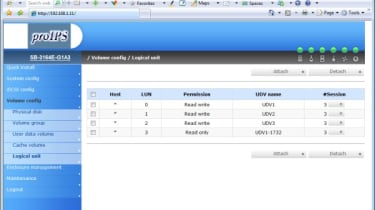 For access control you select a UDV and either make it available to all hosts using a wildcard or enter the full IQN of the host initiators allowed to access it. During this phase you can also decide on read or read/write privileges. Note that the controller only advertises a single iSCSI node name with all accessible virtual volumes appearing under this as LUNs (Logical Unit Number). This isn't a major issue but as CHAP authentication is applied at the node level it will apply to all hosts and all LUNs. Even so, you can create multiple user accounts each with their own CHAP secret.

VGs can be migrated to different RAID arrays and expanded if required, and for the latter all you do is specify extra physical drives but keep the same array type. UDVs can also be expanded into spare space within the assigned VG simply by clicking on a button in its size column and entering a new capacity. ProWare includes volume snapshots as standard and the array supports up to 32 in total.

For each UDV you need to specify spare space for their snapshots and ProWare recommends around 20 per cent. With this configured you can create on-demand snapshots manually or set up schedules to run them regularly at hourly, daily, weekly or monthly intervals. Snapshots can then be used to rollback their associated UDV in the event of a problem. You can also present snapshots as new read-only UDVs and we found that after attaching a snapshot to all hosts it appeared as an optical read-only drive that was a perfect copy of the original.

For performance testing we created three striped VGs using two sets of four drives and one with eight drives. We then created UDVs within each one and made them available to all hosts. For our client systems we used dual, quad core Xeon Dell PowerEdge 1950 and Boston Supermicro servers loaded with Windows Server 2003 R2 and the latest Microsoft iSCSI initiator.

We logged one server on to one data port and the second on to the other port and in both cases we were presented with a single node with three new virtual drives available. Running Iometer on the Dell server returned impressive results with it reporting a raw read rate of 112MB/sec for one target. With a second instance running on the Boston system we saw a high cumulative read throughput of 223MB/sec.

For MPIO ProWare gets our thumbs up for the detailed setup procedures in its manual something a few other vendors should take note of. To test this we logged on to both data ports using the Dell system with its initiator configured to use both the server's network ports. With a fault tolerant link now in place we copied a 2.52GB video clip to the iSCSI target, disconnected one network cable and watched it continue without pause.

The SB-3164E-G1A3 certainly hits the spot for value but sacrifices have been made to achieve this as support is lacking for dual controllers, expansion arrays, mirroring or remote replication. However, the array does provide basic hardware and network fault tolerance and snapshots are included as standard making it a good choice for building a simple IP SAN.

For the price ProWare is offering a very tempting IP SAN proposition as this array delivers on capacity, performance and basic fault tolerance and redundancy. Key enterprise features such as dual controllers, remote replication and mirroring are not supported and the array can’t be expanded with extra disk shelves but as a simple, high-capacity IP SAN appliance it can’t be beaten on value.