It may be a late entry to the IP SAN party but the FibreCAT SX80 iSCSI aims to beat the rest on value, features and ease of use. 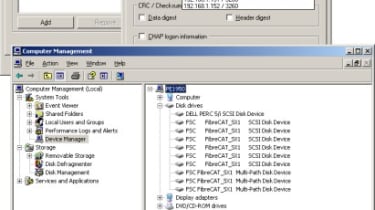 Access controls are good as you select a volume, pick your logged in hosts from a drop down list and decide whether they should have read only or read/write access. These privileges can be applied to specific data ports and you can also assign LUN numbers as well. CHAP authentication is on the list where you can enforce this globally or activate it for selected hosts only and give each one their own secret.

Volume snapshots are used to take point in time copies and are supported as standard. The price includes a license for four snapshots and this can be upgraded up to 32. Volumes copies are also a possibility but this is an optional feature that represents an additional purchase. However, a scheduler is included enabling you to run snapshots and volume copies at regular intervals.

Only available with SAS drives, the appliance also supports iSCSI boot capabilities. This enables you to remote boot servers from the appliance and a key reason this feature has been implemented is that Fujitsu Siemens uses the SX80 iSCSI appliance as the central storage component in its x10sure we'll be bringing you a review of this server clustering solution soon.

For testing we started with a Boston Supermicro dual 3GHz Xeon 5160 server running Windows Server 2003 R2 and the latest Microsoft iSCSI initatior software. Our initial speed test involved creating a quad drive RAID-0 striped vdisk with four volumes, which we made available to all hosts. After logging on we were presented with four new drives in Windows Explorer ready for formatting. Using the Iometer utility configured with four disk workers, 64KB request sizes, 100 per cent sequential reads and 100 outstanding I/Os we saw a very reasonable raw throughput of 108MB/sec.

We then added a quad-core Xeon Dell PowerEdge 1950 server to the mix and logged its iSCSI initiator on to the second data port with a dedicated volume assigned to it. On our initial Iometer test run we saw a good average raw read throughput of 109MB/sec. With Iometer running on both servers simultaneously we saw a cumulative raw throughput of around 120MB/sec showing clearly that there was contention for resources on the single RAID controller.

Naturally, MPIO is supported and setting up fault tolerant connections proved to be a simple process helped along nicely by the copious documentation. We mapped one volume to both data ports and then logged in from the Dell server initiator using both IP addresses as targets. We had no problems creating a fault tolerant link and during a copy of a large video clip to the iSCSI target we disconnected one network cable from the server and watched it continue unabated.

The increasing number of IP SAN appliances coming on to the market is testament to popularity of this network storage technology. It's a far better choice for SMBs than costly FC SAN solutions and the SX80 iSCSI delivers a fine range of features for the price. Deployment is very easy, it has good expansion potential and with Fujitsu Siemens currently offering a bundle deal that includes a quintet of 500GB SATA hard disks for 2,995, it looks even better value.

The exponential rise in popularity of IP SANs means there’s a lot of choice on the market with value and ease of deployment now key selling points. The SX80 iSCSI certainly scores on both these counts as it’s competitively priced and we found it easy enough to install in the lab. Performance under heavy load could be better but it is capable of handling the demands of the target market making it a good choice for SMBs looking for a low cost entry point into IP SANs.