With Christmas almost upon us it is time to look at some exciting executive gadgets and affordable computer accessories that will please any geek this festive season. 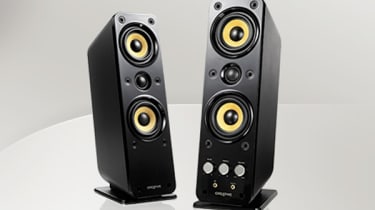 Writing a Christmas gadget round-up is always a challenge. For people like us who are so passionate about technology, writing one of these could easily turn into an opus.

This year we've tried to be a bit more disciplined. We've kept our round-up small and simple, and tried to focus on the cheaper end of things - where possible. We've featured a lower-cost alternative to the main product in each category, so that you have price options as well as feature options to choose from.

We have barely scratched the surface of the gadget market this year, which has seen a bumper crop of products released in the run up to Christmas.

For a budget MP3 player that also doesn't skimp on features, we particularly liked the ZEN Mosaic from Creative. We've made a point of not reviewing any iPods this Christmas, as little has changed in terms of features, especially in the low-end Shuffle.

The Mosaic is a small and light flash-based player with a colour screen and four direction buttons for navigation through the straightforward menu system. There is also a built-in microphone allowing it to be used as a very capable voice recorder.

Charging and music transfer is done via a mini-USB port. No charger is included, but a USB cable is allowing you to charge from your computer, though we found almost all mini-USB chargers worked with it.

There is no video support, but it works well with MP download services such as Amazon.co.uk's MP3 store.

At the higher end of the scale we have Creative's ZEN X-Fi. We took a look at the 16GB version, which also has a built-in SD card slot for adding additional flash storage.

As well as excellent MP3 audio playback and voice recording, the X-Fi also has a larger screen and built-in Wi-Fi for over-the-air downloads from your home network. There is even built-in instant messaging support, though we couldn't work out why you would want that on a player with no keyboard. The X-Fi also comes with a very nice set of noise isolating headphones.

The buttons are a bit strange, an unmarked bank of nine metal buttons in a three by three square handle not only navigation but also player controls. It is easy enough to get the hang of it.

For us, the most exciting thing about the X-Fi is that it is compatible with the download function recently added to the BBC's iPlayer service. As it supports the playback of DRM-protected Windows Media content, you can happily download all your favourite shows from the BBC iPlayer site, and drop them onto the X-Fi to watch on the move.

If you like good audio from your computer, then these are the speakers for you.

Finding good speakers of any type for a computer is hard work at the best of times, and finding good 2.0 speakers is even harder. The Gigaworks T40 Series II have both the feel and the sound of mid-range hi-fi speakers and come supplied with a decent array of connectors and high quality cable.

Also noticeable is that they weigh a tonne, not surprising given the study construction and what is packed inside them. Each speaker features a Midrange-Tweeter-Midrange (MTM) configuration. A silk dome tweeter with dual woven glass fibre drivers produces superb audio range, while the overall speaker output is a respectable 16W RMS.