If you need to add RFID tags to your stock, this Zebra printer makes it a quick and simple task to produce them on demand. 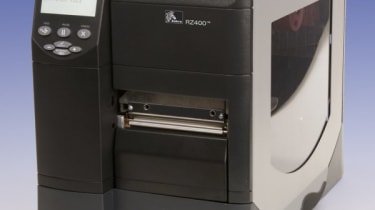 RFID tags were going to be a revolution in retailing, with every can of beans and bar of soap marked, so it would announce itself when it left the building. You may have noticed that hasn't happened yet, not in the shops themselves, anyway. With a few exceptions on high valued goods M&S RFID tags its clothes, for example, to simplify stock-taking the technology hasn't taken over the sales floor. In the storeroom and the distribution warehouse, though, things are different.

A lot of the major retailers, like Wal-Mart in the US and Metro in Europe, have discovered the advantages of tagging pallets of goods, so they can tell what's on them, rather than tagging individual products. They are mainly tagged with passive RFID, which means the tag reader emits enough RF energy to both power the tag, through its attached antenna, and read back the information, usually only a few tens of bytes, that it holds.

To be able to tag stuff, of course, you need to be able to print RFID tags and Zebra's RZ400 is one of a range of label printers the company produces that can do this. This isn't an inkjet printer, instead cleverly creating a tag from scratch like a prototyping machine. The 'blank' tags, complete with antennas and tiny embedded processors, are mounted on the backs of otherwise normal label rolls, as regular consumables.

The RZ400 prints the visual contents of the label, which can include text, graphics, bar codes, or virtually anything you might want, and write data to the RFID tag. The printer can handle non-RFID labels, too, and it's possible to retro-fit RFID capability to Zebra's Z range of label printers. It would be useful if the printer could handle both types of label roll at once, for those with only occasional RFID requirements.

The desktop printer, about the size of desktop mono laser, sits up vertically, with a control unit on the left and the print mechanism on the right, under an 'sports car bonnet' style cover. A large roll of labels, which may be from 2-inch to 6-inch wide and up to a metre long each, fits over a spigot at the rear, with a roll of black dye-sublimation film in front. This is normally black, though single-coloured ribbons are available to special order. A thermal print head sits at the front of the machine and labels feed out the front as they're printed.

Loading the label roll is a bit fiddly, as there are a couple of places where the gap to feed the roll through is quite small, but once fitted in the right path, the printer detects where the gaps between labels lie and lines itself up, automatically. Adjustments for most aspects of print set up can be made from the back-lit LCD display, from the supplied label design software or from other programs, via the RZ400's Windows printer driver.