SSD are inherently better than conventional hard disks right? We pitch an SLC-technology based SSD drive against a regular one to see how it fares. 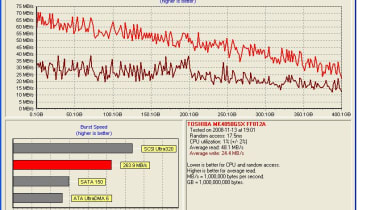 To test the performance of the near 700 drive, we hooked it as a secondary slave drive on as fast a desktop PC system as we could find, in order to avoid bottlenecks. We used a system based on the latest technology a 3.2GHz Intel Core i7, with 4GB of RAM and a standard 5.25in 5,400rpm hard disk ensured that this was the case.

For comparative results we obtained a conventional 2.5in hard disk drive as you would likely find in many laptops, in the form of a Toshiba MK4058GSX a hefty 400GB capacity drive.

Firstly we ran HD Tach, a free software utility that designed to test the performance of I/O devices such as a hard disks. The figures it delivers are an average read speed, an average write speed, a random access time and a maximum burst speed.

In addition we also ran some more 'real world' tests by copying a folder of 22.6GB of data. The data consisted of large, medium and small files and as such presents a really tough test for a hard drive.

First up then, in HD Tach is the Traxdata, which achieved amazing average read speeds of 149.6MB/sec, which actually beats out its maximum claimed read speeds of 119MB/sec. However, the average write speeds were down at 83.8MB/s below its claimed 99MB/s.

Still, this compared very well with the Toshiba 400GB drive, which could only achieve figures of 48.1MB/sec read and 24.4MB/sec write.

Random access was also far superior on the SSD at a mere 0.2ms compared to a relatively tardy 17.5ms on the SSD.

One thing one the HD Tach results reveal on the Traxdata drive is the rather inconsistent performance of some of its I/O read data, which rather than showing a steady line moves up and down in a rapidfire manner. This indicates that the drive controller inside is not as efficient as it could be which create this stop-start effect.