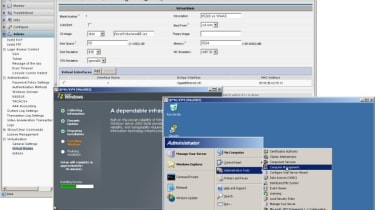 The edge WAE systems provide VBs for the Windows Server OSes and these are easily accessed from the same CM management console. Once they are enabled you can create virtual environments with memory and hard disk space and boot them from an ISO image or using the local DVD drive on the appliance. Our system already had Windows Server 2008 Core preinstalled on one VB so this just had to be started to use it.

Remotely administering VBs is a cinch as you use the RealVNC client configured with the IP address of the appliance and its VB number. We had no problems whatsoever with this function and also created a second VB and installed Windows Server 2003 R2 on it by booting it from the local optical drive.

The CM management interface provides access to all devices although it takes a little practise to figure out how to access certain menus as choices available depend on which device or group is selected. It provides a tidy dashboard with graphs for general traffic levels and optimisation percentages plus a monitoring section showing more detail on HTTP, MAPI and video traffic.

To test WAN optimisation we placed a Network Nightmare WAN simulator (www.networknightmare.com) between our local and remote network and configured it for a 1Mbps WAN link with 40ms latency. WAAS delivered some impressive results as copying a 5MB Powerpoint presentation between the server and client with no optimisation took 47 seconds and with the WAEs in the mix and the file cached this was reduced to less than two seconds.

FTP operations were equally well served as copying the same test file from the server using the FileZilla client took 42 seconds without optimisation and less than one second with it activated. Mailing the file between the mail server on the LAN and a remote client took 184 seconds to send and 57 seconds to receive and with WAAS in action these times were reduced to less than two seconds.

To test video delivery we used a central server running Windows Media Server and streamed a published video using RTSP over TCP via the WAN link to our branch clients. With the edge WAE plus client web caches cleared and streaming to one client we saw a bandwidth usage on the server of 108Kbps. Optimisation was already playing a part here as streaming to one client on the main LAN saw an initial bandwidth usage of around 420Kbps.

With two remote clients running Windows Media Player we saw usage settle at 116Kbps showing that apart from some protocol overheads the media server was still only sending a single stream. Once the video had been cached we could see from the media server that further playbacks were not generating any LAN traffic.

The preposition feature will prove useful for VoD and other applications such as SMS software updates as from the CM console you can define file locations on specific local servers and push them to the branch appliance's CIFS file cache during quiet periods. Policies are used to control this function and are assigned to selected edge devices where they can schedule it to run at regular intervals.

During testing we found WAAS 4.1 an easy partner to work with and were impressed with the level of new features and improved management capabilities. The Windows Server virtual blade option makes WAAS quite unique as do the live video streaming functions and our tests showed this solution delivering in the performance stakes.

This latest version of Wide Area Application Services (WAAS) delivers a range of new features with improved installation as a key priority and we had no problems deploying it the lab using the default policies and systems settings. The new Windows Server virtualisation feature sets it apart from the competition as does the video streaming functions making for a highly versatile WAN optimisation solution.