We take a look at a preproduction sample of Panasonic's Centrino 2 based 'business ruggedised' Toughbook CF-W8. 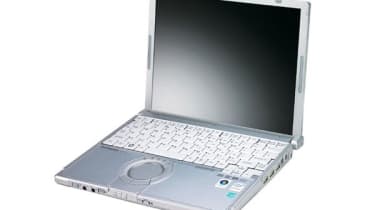 Several touches around the suitably tough chassis are sure to please business users who need their notebook to take a bit of a beating. The optical drive a DVD writer sits below the keyboard, accessible via a small switch. It's an effective way of keeping your drive safer than had it been in the traditional position on the side of the chassis, although opening the door is actually quite difficult. There's a physical wireless switch on the front of the Toughbook, and the battery is secured by two tough locks.

The CF-W8 is well equipped for ports and sockets, too. Three USB ports sit beside Ethernet and modem sockets, and the SDHC card reader sits in a small recess below the ExpressCard/54 slot. There's a VGA output, but that's it as far as display outputs go and the available port replicator, which costs at least 80, doesn't rectify this situation. Still, the USB ports, card reader and connectivity options have most of the bases covered.

Open up the Panasonic and start to use it, though, and you'll run into problems the amount of ruggedisation that's been applied to the CF-W8 mean that it isn't an ergonomic success. The keyboard, for instance, feels reasonably comfortable to use the keys offer plenty of travel and as pleasant to type on but several aspects of its design leave us cold. Each individual key is slightly shorter and wider than the average laptop key, which initially threw us off, and the single-height enter key and tiny space bar make for an annoying initial period before you get used to the Panasonic's various nuances. We'd go as far as to say that the best netbooks offer a more comfortable typing experience, although obviously these devices don't have anywhere near the hardware protection, or performance, that the Panasonic offers.

The trackpad isn't without fault, either. It's a quirky circular unit but we're not entirely convinced. While the surface is reasonably snappy and responsive, it's far too small, and the accompanying pair of mouse buttons, again, lack in the size department. The circular pad may look trendy and modern, but a traditional rectangular pad would have done a far better job.

The screen, along with the keyboard, isn't without fault. There was a small amount of backlight bleeding through from the bottom of the panel, and bright colours looked slightly dull. Bright white tones also had a slight red hue to them, which means that this wouldn't be ideal for precise photo editing. During every day use in Word and Excel, for instance the screen's minor deficiencies aren't noticeable, and the many brightness options mean that it's a particularly versatile panel.