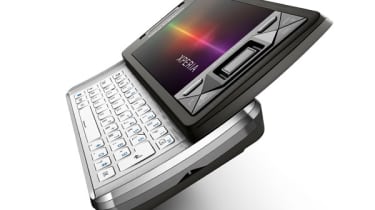 One offers a a clock and an RSS feed along with some a number of functions, while another is simply an animated screensaver featuring fish. Moving between them is sluggish, as a low res version appears, freezes the device for a few moment, before the high res version kicks in.

And even if you like them, the ugly Windows Mobile dialogue buttons are only a few clicks away. It actually reminds me of Vista 3D Taskbar - a flashy but destined to be little used feature.

More panels are available online and the Facebook one we tried was particularly creative, with each of your friends appearing as images inside slowly colliding bubbles, and their status displaying across the screen at the top. Overall though, the Panels have a less natural feel compared to HTC's Touch Flo 3D interface.

In terms of features there's no much the X1 can't do. With Office Mobile, Google Maps with GPS, MSN Messenger, and the supplied Opera Mobile browser, all doing the business. However, we noted a few quirks, such as the earlier mentioned Skyfire failing to run and the same occurred with Google's Java based mail application.

Battery life is a real upside for the device though, as you can be confident of getting through at least a single day of medium use - that is some web browsing, emailing, music playing and phone calls, on a single charge.

As such, there's actually a lot to like about the X1 Xperia. It's not nearly as slick as a iPhone or a G1 by any stretch of the imagination but if you want or need the sheer flexibility of Windows Mobile, or are simply locked in by the corporate compliance of the device, and you want a physical keyboard then it's really down to a choice of the X1 or the HTC Touch Pro. A lot of this will be preference, but the smaller size, lighter weight, superior battery life, and higher res screen are likely to swing it in the X1's favour for many.

Despite the nonsense that are the Panel's, the X1 does genuinely have more personality, and with the external camera button, the scroll panel control, the dialer with large buttons trick and the high resolution it's actually the easier to use. Occasional sluggishness and some glitches do spoil it somewhat but overall, if you want Windows Mobile and a keyboard, the X1 gets our nod.

The X1 doesn't really live up to the hype that the long wait for it had generated, but even so it still manages to be the most usable Windows Mobile device yet. Chief reasons for this are the high resolution screen, a touch screen dialer that has buttons actually large enough to use and best in class battery life.