Company's new U115 netbook combines both solid-state and conventional hard disks to give best of both storage worlds. 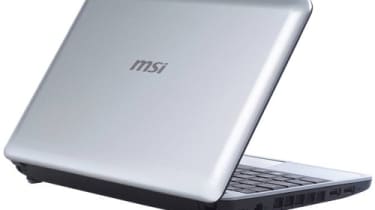 If you can't decide whether to buy a solid state or a conventional hard disk for your next netbook then MSI has solved the problem for you by including both in its new U115 machine.

The company claims that this is the first notebook in the world that is capable of running both types of disk simultaneously.

The aim is to combat having to decide between performance and capacity, by using the SSD for "primary operation", and the standard disk to file storage. Engaging the "ECO on Mode", will disconnect the conventional disk and increase battery life.

The hard disk capacity is either a 8GB SSD and 120GB HDD or 16GB SSD and 160GB HDD. Other than that, the U115 is a regular netbook with a 10in display, a 1.6GHz Atom CPU, a 1.3 or 2-megapixel webcam, a card reader and three USB ports along with Draft-n wireless and Bluetooth.

Users can choose between a three and six cell battery with the former bringing the U115 in at around 1Kg.

Pricing and a specific release date have not yet been announced by MSI.