The Windows 7 Beta has been released to its widest audience yet - we give our early verdict on the operating system that is rumoured to be hitting shelves before the end of the year. 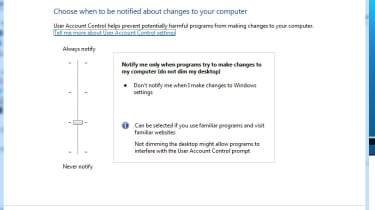 At CES yesterday, Microsoft chief executive Steve Ballmer said: "I encourage everyone to go out and download it." You'll have to be quick though, as the beta will be limited to the first 2.5 million downloads.

It's a good number though, and a clear indicator that Microsoft is keen to get its new baby into a many people's hands to show them it has listened to the criticisms aimed at Vista.

So has Microsoft managed to create an operating system that won't make you want to chuck your Windows computer out of the nearest window?

Windows 7 has Vista at its core, but it has some well thought out interface tweaks and, as promised, Microsoft has dealt with the annoyances that plagued Vista. In fact, after just a few minutes of using Windows 7, we found ourselves with the clear impression that this really was how Vista should have been all along.

From the off, Windows 7 impressed with an install routine that was amazingly brief, taking around 25 minutes from the start of the slick install routine to having a working system. Admittedly though, this was on a beefy 2.26GHz Core 2 Duo powered Sony Vaio with 4GB of RAM.

When we installed the original build, made available to the press at the Professional Developer's Conference in October on the same laptop, it failed to detect either the Ethernet and Wi-Fi. This time, Windows 7 had the drivers for both. We really liked how it also brought up the wireless network dialogue box so we were connected straight away and ready for updates right from the off.

Once you're done and presented with the desktop, the most immediate thing of note was the new taskbar, which is larger by default. Apps on the taskbar are replaced with larger icons without text. It works well with a mouse, but the large buttons have also been designed with touch interface clearly in mind.

Hover over the icons, and if you have multiple windows of that app open then an animated preview window pops up above the task bar, making it easy to move between documents of the same application.

Right clicking on these brings up the 'Jumplists', which contain useful options pertinent for that particular app, such as selecting any open tab in Internet Explorer 8 - which is built-in and nearly feature complete - choosing recent music played in Media Player, or viewing any open image in Paint. A look at this latter, humble image app reveals that Microsoft has carried over the Ribbon interface from Office 2007. We also really liked being able to right click on each option on the taskbar and close it down individually via the 'X' close button.