If you want to make good IT business decisions, it pays to know what's on the horizon. With 2008 safely out of the way, we take a look at what we can expect from tech in 2009. 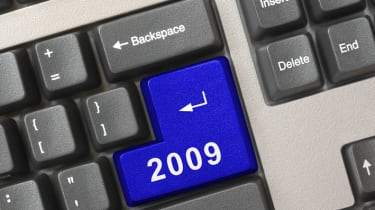 What can we look forward to in the fast moving world of business IT? We gaze into our crystal ball to predict what's going to be big for the coming year in tech.

Cloud computing was one of 2008's biggest buzz words, but in 2009 it's likely to become more than that. Put simply, cloud computing refers to hosting applications on the Internet. It's best known mainstream application to date is Google Docs, but businesses will be familiar with cloud computing solutions from a number of major vendors, such as Amazon's Elastic Compute Cloud, Salesforce.com's Force.com and Google's own App Engine.

In the current economic climate, the ability to offer computing-on-demand offers great appeal to companies looking to make the best possible use of their limited budgets.

Microsoft seems to like to come late to the various tech parties such as its last-in approach to virtualisation with Hyper-V and only announced its cloud computing initiative at Professional Developers Conference in October.

It may be ironically named, seeing that the dictionary definition of Azure is that of a clear and unclouded sky, but even so, Azure is a technology that companies should look out for. Enterprise will like it because it uses the .NET Framework, making it familiar territory for developers, and it will tie in nicely with Exchange and SharePoint.

End users can also start to make use of the Azure platform through Windows Live Mesh, Microsoft's consumer-level synchronisation software that even at beta state is already impressing.

Windows Azure is significant as it marks the beginnings of Microsoft's inevitable march away from client-centric applications to a web-based approach. If Microsoft still wants to be dominant in 10 years time, its Azure project will be crucial in achieving that aim and 2009 is where it all begins to take shape.

While Microsoft will eventually have to move from the cloud to the web, right now it still has to make sure it has a leading edge operating system (OS). Window Vista's problems have been well documented and rumours are that Windows 7 may arrive before the end of the year. But Windows 7 will almost certainly be on next years' list and one of the reasons will be multi-touch. Microsoft has been building the technology deep into the heard of its next operating system, with larger buttons on the taskbar ready for even the fat fingered to be able to connect with.

However, the likes of Asus, HP and Dell haven't been waiting for Microsoft's next behemoth to arrive. Asus has expanding its Eee PC line with the Top 1602, adding a touch icon driven environment on top of Windows XP. Meanwhile, HP has its TouchSmart range of laptops, with multi-touch gesture support while Dell has its Latitude Tablet PCs. All very swish, literally.

While it's not multi-touch just touch RIM has also innovated with the introduction of its BlackBerry Storm. While the device as a whole has received mixed reviews, the tactile feedback that you get when pressing the screen brings a new dimension to screen responsiveness. As it stands though, Apple remains the only one to have brought multi-touch to a phone. It has also added the tech to the Macbook Air and expanded it to its new look MacBook and MacBook Pro line.

Whether we'll be controlling our servers using touch by the end of the year remains to be seen clue, we won't be there's no doubt that as far as client side products go we're going to be getting increasingly touchy-feely with our products in 2009.

One of our favourite technologies is the use of graphics cards, generally thought of as the exclusive domain of super expensive ninja gaming PCs, for industrial and super computing tasks. This is a technology that's referred to as GPGPU (General-Purpose Graphics Processing Units).