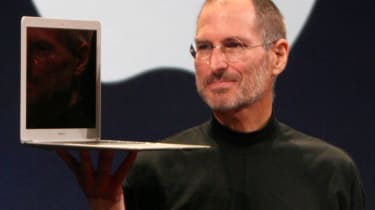 If he shows up on stage looking a bit gaunt or worse, doesn't show up on stage at all it's enough to send Apple's shares spiralling. So what happens to the firm when Steve Jobs finally does step down, whether it's this summer due to illness or 10 years from now for retirement?

Jobs' health has long been an issue, ever since his successful battle with pancreatic cancer in 2004. But while last year was a good one for Apple, posting record MacBook sales and launching the iPhone 3G, it's not been a great year for Jobs' health. As a cancer survivor, he's clearly had worse years, but as he steadily lost weight over the past few months, appearing on stage thinner each time, the rumours started again. Was the cancer back? Was it something else? And what was Apple going to do if Jobs had to step down again?

Apple has never answered that last question it simply refuse to discuss the issue. It's not particularly strange for a major firm to not make details of its chief executive (CEO) succession plan public knowledge, but the combination of Jobs' apparently poor health with his firm control as the leader and public face of Apple makes many people want to know more especially shareholders, who would likely prefer the smooth transition Microsoft pulled off after Bill Gates' departure than any surprises.

At the end of last year, Jobs tried to calm the rumours by explaining the source of his weight loss. It wasn't cancer, just a basic hormone imbalance. But this week, Jobs emailed an open letter to his staff, explaining it wasn't such a simple health issue as first thought, saying "during the past week I have learned that my health-related issues are more complex than I originally thought."

With that, Jobs stepped down for six months, in order to receive treatment but also to let Apple continue its work without having to deal with the malestrom of gossip that surrounds his health. Jobs wrote: "Unfortunately, the curiosity over my personal health continues to be a distraction not only for me and my family, but everyone else at Apple as well."

But as Apple refused to comment for this story on the succession issue, all we're left with is rumour and speculation about who could be the next leader of Apple. The options

Tim Cook, Apple's chief operating officer, will lead Apple's day-to-day operations until Jobs' return much as he did when Jobs left for cancer treatment in 2004. But Jobs has made it clear that he will keep his hand in things over the next few months, robbing Cook of the chance to take responsibilty for the full company.

But does that mean Cook's next in line for Apple's throne? Mike McGuire, a research vice president at analyst firm Gartner, said it's simply impossible for anyone outside the upper echelons of the firm to have any idea. "[It's] very hard for any outsider, even a longtime observer, to answer this. Clearly, Cook has the temperament to do the job, in as much as he's been there since 2000," McGuire told IT PRO. "So does he have the chops' to lead the company? Sure." "Is he the next Steve Jobs?' No. there is no next Steve Jobs' just as there is no new Bob Dylan'," McGuire added.