It’s been two-and-a-half decades since Apple launched the Macintosh 128k with a spectacular commercial. 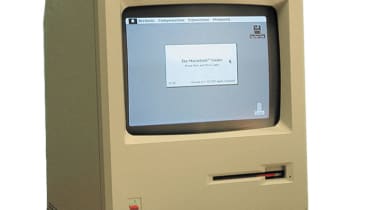 It may seem hard to believe especially to Apple's dedicated fanclub but it was 25 years ago this week that Apple first unveiled the Macintosh computer.

The shiny new product was showcased during an opulent (reported costs vary from $900,000 to $1.5 million) TV commercial directed by now- legendary director/producer Ridley Scott, which aired on 22 January that year during the third quarter of Super Bowl XVIII - although you couldn't actually buy one until a few days later on 24 January 1984.

In the following clip, a much younger, healthier and hairier looking Steve Jobs walks a very appreciative crowd through the Macintosh 128k's amazing features scrolling text, basic animation and even a chess game. Jobs showed off the computer's ability to read text documents, with the machine verbally warning us "never trust a computer you can't lift."

The famous ad promoting the Mac 128k was also aired in cinemas. It referenced George Orwell's novel Nineteen Eighty-Four, and despite its expense, was named the best Superbowl ad in the 40 year history of the game two years ago.

What was your favourite Mac ad? Drop us a line at itpro@dennis.co.uk to let us know.