Simon Bisson shows how to use Windows 7’s virtual Windows XP to run legacy applications – on your desktop. 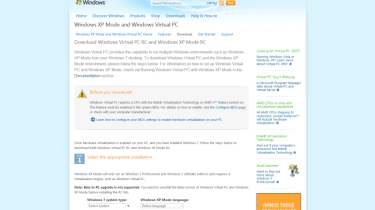 There's a lot of legacy software out there old applications that still run your businesses. That's a problem if you're planning any major system upgrades, especially if you're rolling out a new OS release or deploying new hardware. Old software may not be compatible with your new systems, and the compatibility tools built into a new OS may not be suitable for your older software.It's not such a big problem with server software. All you need to do is fire up a virtual machine manager, install the appropriate server OS, and then install the applications you need. Things get more complicated when it's desktop applications that need to be kept running. Desktop virtualisation tools are less common these days, though VMware's Workstation soldiers on, along with Microsoft's free Virtual PC. There's plenty of innovation on Apple's Macintosh, where tools like VMware Fusion and Parallels Desktop blend Windows applications with the OS X desktop hiding the virtual machine from the user.Microsoft's MEDV (Microsoft Enterprise Desktop Virtualisation), uses similar techniques to deliver managed applications to Vista users with centrally managed desktops run on local virtual machines. It's that same approach that drives Windows 7's XP Mode, though here there's no central management server, just a licensed XP client running on a Windows 7 PC in a version of Virtual PC sharing resources with your PC via Terminal Services. This is probably the last generation of Virtual PC, with Microsoft's Hyper-V hypervisor now getting the lion's share of Redmond's resources. There are some restrictions, and XP Mode will only run on Windows 7 Professional, Enterprise or Ultimate, as Microsoft is treating it as a business tool, and delivering only to the business SKUs. You'll also need to have PCs that have hardware virtualisation support XP Mode won't run on hardware that doesn't have CPUs with it built in, or with BIOSes that don't have it enabled (as some Sony laptop users discovered recently). Many laptops use low power Core Duo processors that don't have the requisite features, and you certainly won't find it on a netbook with an Atom processor. However, if you can jump over the hurdles, then XP Mode is an important piece of the Windows 7 jigsaw puzzle, and one that will make it a lot easier to manage upgrades from Windows XP especially if you're not planning on deploying and managing the full MEDV platform.