A British based technology company is working on a fully voice activated handset that it says could revolutionise the industry. 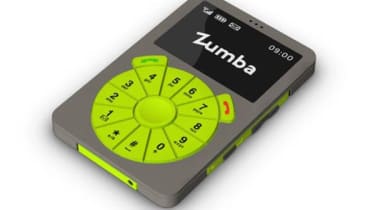 A handset with an unlikely name is being touted as potentially revolutionising the industry, due to what its makers claim is the world's most accurate voice recognition system.

The Zumbafone could be available by the end of this year, according to reports.

The innovation is a circular pad that can be placed over the ear and detaches from a small handset that contains a circular dial pad and screen. Simply removing the earpiece pad from the handset activates a connection to the internet. You then simply say the name of a contact to dial a number or send a text. When you receive a text it can them be read out to you.

No contact information is stored on the handset itself, with all data being held in the cloud', which the makers say makes the phone 100 per cent secure. As it is fully tied to voice recognition, the claim is that if lost, the phone cannot be used by anyone else.

The phone is aimed as a low cost, or secondary phone, so eschews features such as high resolution screen and camera.

Chief executive Dean McEvoy said his dyslexia made it difficult for him to send texts using conventional methods, leading him to develop the voice-based Zumba.

"I have dyslexia and I can't text - so what happens is that if I'm driving in my car if I get a text message it can be read back to me and I can respond to that by pressing on the button and I can speak my text."

The company says that the handset has been in development for three years, which might explain its rather dated looks.

In November last year, Google released a voice activated search tool for the Apple iPhone, though it currently only works well with US accents.