Synology serves up an appealing NAS storage unit for the small business user. 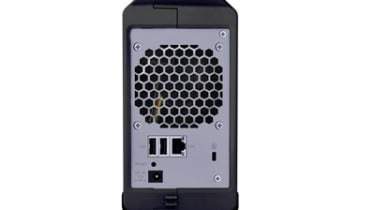 NAS (Network Attached Storage) drives are increasingly popular at the moment, as they offer quick and easy centralised storage for businesses. We've been greatly impressed by previous Synology NAS devices, but they tend to be expensive, which can be a problem in these financially lean times. This is especially true since they don't come fitted with any hard disks you have to provide your own. The Disk Station DS209+ is relatively inexpensive at just over 300 ex. VAT, but it uses the same firmware and web management interface as Synology's more expensive models.

The DS209+ can take up to a pair of 3.5in SATA hard disks, but it doesn't use removable disk trays or have a tool-free accessible drive bay. To fit disks, you have to slide off the side panel, fix your disks into the metal holding bracket using the provided screws and connect the disks to the motherboard using the included SATA data and power cables. The process is a little fiddly, but it's not too difficult to accomplish. More easily accessible disks would help reduce down time when replacing disks and rebuilding a RAID array though.

Both RAID 0 and RAID 1 are supported. Even if you initially use the DS209+ with only one disk, you can still add a second to create a RAID 1 array without wiping the first disk. It's always a good idea to back up your data when performing such fundamental configuration tasks though.

Configuring the DS209+ is straightforward thanks to its web management interface. Since it's built using AJAX, it looks slicker and feels more responsive than other NAS web management interfaces we've seen. Creating new users is quick since the user account creation wizard also lets you assign them to existing user groups and grant or restrict their access privileges to existing shared folders. If you have lots of users on your network, then you'll appreciate the ability to create multiple user accounts with identical settings with only a few mouse clicks.