There are many VoIP offerings available for business. Does the DECT based snom m3 offer enough to stand out from the crowd? 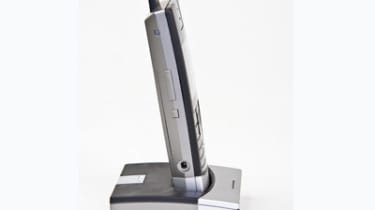 VoIP telephone is nothing new, but with the recession biting deep it could take on new significance over the months to come. Companies are going to be looking to cut their expenses wherever they can and moving to VoIP from traditional systems could enable signal significant cost reductions.

By using a common infrastructure the network businesses large and small can sign up, purchase equipment once then choose and switch between VoIP services and software at will, as budgets and circumstances dictate. In this way inter-office call costs and calls to commonly called international destinations can be cut drastically.

Experts have widely predicted uptake could surge as the economic downturn worsens, and Snom's m3 seems ideally situated to take advantage. At first glance it seems a perfectly normal telephone. It uses the same DECT technology that residential cordless phones use, offering a claimed range of 100 metres outside and 50 metres indoors (though obviously the latter will vary, depending on your architecture).

The hardware itself is unremarkable. The handset is light and easy to use and we liked the 128 x 128 colour screen and simple menu system. There's also a speaker phone toggle switch, volume control, a 2.5mm headset socket and a built-in belt clip, so the phone can be used handsfree while moving about. But it doesn't feel particularly robust and the plastics are little on the cheap side a little disappointing considering the cost of the unit. The wedge-shaped base station is at least a little more attractive, clad in bronze and charcoal-coloured plastics.

It's when you start to examine the m3's capabilities that its strengths begin to surface. Up to eight handsets, each of which comes with its own charging cradle, can be attached to each base station, and up to three concurrent calls can be made per base station a feature that makes it ideal for use in all sorts of environments. With one piece of kit you could equip a small estate agent office, for instance; with three or four, a whole floor could be provisioned.

The m3 also supports simultaneous subscription to up to eight separate SIP accounts we paired our review unit with a Gradwell VoIP account, but you could in theory run one service for inter-office communications, another for calls to, say, India and one more for local calls to the UK and you'd still have room to spare for five other services or servers. The phone supports STUN, RPORT and SIP-ALG circumvention.