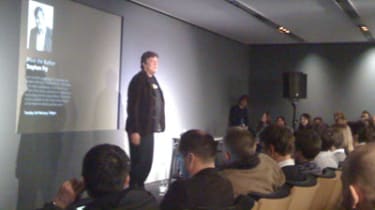 Stephen Fry, currently the unofficial champion for social networking phenomenon Twitter, has broken the 100,000 follower mark, just in time for a talk at Apple's Regent Street store in London.

After the talk, where he recounted the early history of computers, and the personal history of his digital life, he answered questions from the audience where he was congratulated for becoming the second most followed person on the planet on Twitter after US President Barack Obama. "I'm the vice president of Twitter," Fry joked.

Fry's Twitter count only hit the 50,000 mark recently, but received massive boosts following his appearance on the BBC website and the Friday Night on Jonathan Ross TV chat show, taking him over the 100,000 mark in just a few days.

He observed that he believed that Twitter terrified the press as it gives celebrities a right of reply direct to their audience. "If you could get a big enough following it could be bigger than any paper. There'd be no need to own a newspaper. I won't weep any tears if that happens. I don't mean necessarily what we have now, but that's what it points to."

Fry was also asked his thoughts on the Creative Commons group, devoted to lifting the shackles of copyrights. Fry admitted that he was very much in favour. "I'm not excited about my copyrights. If someone stole large wodges of my works I'm sure my publishers would get very upset, but I'd say, Golly, that's a pity'. I'm in an overpaid profession so if some of it leaks away, then tough."

He also admitted: "I have pirated software. But if that's a shocking announcement then how nave can you be I bet you have too and your house is full of stuff you've bought too."

Fry also presented the case that when cassette tapes were released in the 80s record sales went up. "If the creative industry gets too snotty about it, people will just see them in them in their Rolls Royce and just say **** off."

He also gave strong views on the issue of net neutrality, stating that while the internet has its hazards we should be very careful about placing restrictions on it. "The internet is like a city - it has red light districts, all kinds of weird people, who want to con and steal from you, but my god, they're exciting places to live and to be a citizen of it is a great privilege. Yet people are trying to control the internet like they would never dare with a city."

IT PRO twittered live from the event and a video podcast will appear next week on the UK Apple web site.

What did Stephen do next? Clue: It involved a lift...