Can Fujitsu Siemens produce a netbook worthy of consideration for the business community? We take a look at the AMILO Mini Ui 3520. 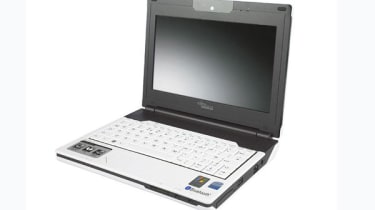 While netbooks started out as a consumer affair, once companies such as Fujitsu Siemens started wading in, there was no doubt that they are being taken seriously by the business world. Efforts from the likes of Toshiba and Lenovo have really sealed the deal - netbooks are a real business tool, especially in this cost-strapped age.

So what does Fujitsu Siemens bring to the table with the Amilo Mini Ui 350? There's not much clue from the name - Amilo is simply the name for its laptop line, while Mini clearly refers to its netbook status - but as for the rest we're none the wiser.

Taking the Amilo Mini from its box, the first signs are promising - at least in the looks department - when it's closed. The lid is covered in white plastic and with the Amilo logo etched on top it looks quite smart and distinctive.

It's not the sveltest computer, at a chunky 35.8mm at the highest point, but the 232.4 width and 175mm depth mean it's still nicely portable and weighs in pleasingly less than 1kg.

It lets itself down a bit once you open it up, though. The keys and trackpad area are smart white too, but above the keys the speakers are encased in an dull and ugly black plastic area. This extends upwards to the bezel of the display, which is overly thick, making it look smaller than its 8.9 inches diameter.

The display has a 1.3 megapixel webcam sitting above it and will do the job of enabling you to communicate via Skype or the video conferencing program of your choice in conjunction with the built-in microphone. In a nice power saving touch, it's possible to deactivate the webcam via the keyboard.

A bigger problem is the display itself. The 1,024 x 768 resolution is par-for-the-course for netbooks, but it's a grainier mottled effect that is far from inspiring to sit in front of for any length of time. While netbooks are not intended for creative work where colour accuracy is important, it's an issue when even office documents look insipid, and it certainly won't do justice to colourful presentation graphs.

Other ergonomic factors also let the Amilo down a little. Keyboards are always going to be an area of compromise on a netbook, with space and budget constraints coming into play. However, the size of the Amilo's keys seem miserly considering the amount of empty space above it. The power button is satisfyingly large and easy to press but writing this review on the machine meant that we had to really constrict our fingers.

The F keys at the top row are particularly tiny and the right shift key is just too small for comfort. In addition, the keyboard has a touch of flex in the middle, which did bother us when trying to type at speed.