With more and more people jumping on the social networking bandwagon, relatively unknown manufacturer INQ has released - the INQ1, a handset that features everything you need for communication on the move. Almost. 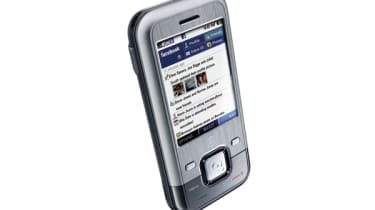 The range of preloaded apps is probably one of the most impressive we've seen. In the applications menu, you'll find everything from Last.fm's internet radio, Yahoo, Bebo, YouTube, Myspace, BBC, eBay, and 3's 3Musicstore.

One startlingly disadvantage of featuring such a huge amount of preloaded applications is that tasks take longer to achieve. Even opening the applications folder took about five seconds, and the camera took about three to fire up with more time required to actually take a photo.

Although on paper the screen measures a pretty respectful 2.2in, it's the application design that's monumentally flawed. When launching the Facebook application, we struggled to make out what we were typing without holding the phone up to our nose. When logged into Facebook, it was nigh on impossible to read updates and messages scrawled on our wall.

This issue is continued with the browser interface too. You can't skim around a page and then click to zoom in as you can on other browsers, making the INQ1 a less than ideal choice for those who like to access web on the move.

However, the INQ1's email interface is up there with Symbian. Although it doesn't have the same functionality as Windows Mobile or BlackBerry, 3's push email service allows you to access up to 10 email addresses (including ISP-based, Hotmail, Yahoo, Google plus a host of other accounts) on the move, in one application.

Email is displayed in the Messages menu, which also includes Facebook messages, pokes and requests so you don't have to log onto the awkward app every time, plus Messenger chat and pull email if you don't want to pay 5.00 a month for Email on 3.

Another handy communication app on the INQ1 is the specially developed Skype app. Just like the Facebook application, it's a pain free process (bar the small text issue) to get Skype up and running. If you already have a Skype account, simply enter your username and password and you're contacts will pop up. If you don't already have a Skype account, you can set one up in seconds straight from the handset.

Sound quality is, as you'd expect, a little lower quality that traditional phone calls, but it's more than ample and you'll have no issue understanding the person on the other end of the call.

Each of these applications is well integrated, but something which makes it even more special is that you can match up users and contacts to their IM, Skype, Last.fm and Facebook accounts, meaning you can select a user on Facebook or Skype and then view their music collection on Last.fm. This also means that in the contacts directory, you can see when people are online, a particularly useful feature if you want to make a Skype call or start chatting on IM. The INQ1 won't set this up automatically, but will update statuses and who's online whenever you have access to the network.

The INQ1 is a social networking phone through and through. Its integration of social networking and communication tools such as Facebook, Skype and IM the mobile phone usage to a new level. These may be features seen on smartphones, but to have them on a phone that costs less than 80 on prepay is quite frankly, inspiring. Some developments are required for the next edition, including the ability to zoom in and out of pages, and maybe the addition of Twitter, but the INQ1 sets a new standard for communication.

The INQ1 is an inspiring handset for social networkers and communication in general. Although not as advanced as a smartphone, the INQ1 is a viable option for businessmen on the move, with a very affordable price tag.