Sometimes a small, inexpensive networked printer makes more sense than using the monster printer down the hall. We examine this affordable unit from Lexmark. 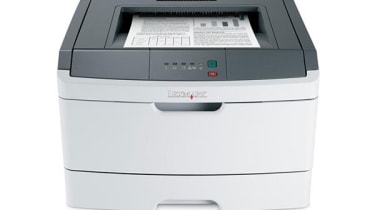 Increasing the page count to 20 took the speed up to exactly 20ppm, while printing the same 20-side document in duplex mode dropped it back down again to 15ppm. This last speed is good, as printing duplex normally cuts the single-sided print speed in half, but here you get 75 per cent of the simplex speed.

Unlike the company's inkjet printers, which in general offer slightly poorer print quality than their main rivals, Lexmark's laser printers have long been known as very good performers. Black text print is clean cut and shows no sign of toner spatter infilling hollow letters like Ds, Os and zeros. In fact, even under a low magnification loupe, text looks smart and clean.

Introduce greyscale graphics and the printer still does well, with enough greyscales to reproduce colours so they can still be differentiated in a monochrome print. Large areas of tint generally reproduced well, though there's some graininess in some of the darker hues.

This also shows in the kind of graduated tints used to reproduce skies in photo prints and we also noticed a repeating flaw in our test prints. This looks like a mark on the photoconductive drum and since our review machine was supplied with the drum in situ, it could well have been damaged in transit or in a previous review. Otherwise, the photo print showed a good level of detail from the printer's effective 2,400dpi resolution, though details in shadows were largely lost to black.

Print costs come down to the drum and toner prices and the drum itself can be found for under 30; very reasonable. The 3,500 page toner cartridge costs 75, though, which brings the overall page cost up to 2.2p. While this isn't high compared with some machines in this price bracket, we have seen page costs as low as 1p per sheet elsewhere.

A mid-range, mono laser printer with a good turn of speed, particularly when printing duplex. Cost per page is reasonable, though we have seen better, and print quality is also better than average. Maintenance is simple and shouldn't be too frequent, so the printer could easily be kept running by non-expert personnel.