Mobile World Congress wouldn't be the same without a few announcements from Finnish mobile leader Nokia. 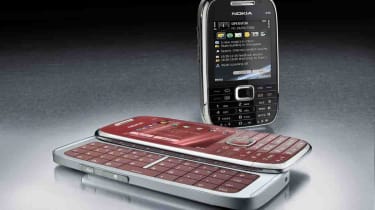 Nokia has taken the opportunity of the Mobile World Congress to launch its own app store and unveil a host of new handsets, including two new additions to its E-series.

The application store, an expansion of the firm's existing Ovi platform, is dubbed the Ovi store and is expected to go head to head with Apple's app store from May.

Between March and May developers and content creators will apparently be able to post their applications to Nokia's new portal publish.ovi.com. Nokia said it will host and manage the store while offering developers a 70 per cent revenue sharing deal.

When it came to the phones themselves, Nokia did not disappoint, unveiling both the E55 and the E75 as welcome additions to its popular E-series.

The E55 purportedly comes with a standby battery life of 28 days, a 20-key QWERTY keyboard and a GPS system. Nokia said the phone also offers a dramatically better email interface for what the firm calls a "desktop-type experience" and should be available by the second quarter of 2009, priced at around 265.

The E75, a new slider phone from the Finnish handset maker, also comes with an overhauled mobile email interface and includes HTML email support, expandable views and sorting capability by date, sender and size. The E75 also boasts Nokia Maps and assisted GPS with an integrated three month licence for turn-by-turn navigation. Nokia says the E75 is expected to ship next month for around 375.

"With the Nokia E75 we took a lot of inspiration from the Nokia 9300, which was our first mini communicator. Owners of the Nokia 9300 loved the messaging functionality a full keyboard provided, but also used the traditional phone keypad a great deal. With the Nokia E75 we kept these essential ingredients, significantly upgraded all of the features and made it as compact as possible," said Kai Oistamo, Nokia's executive vice president, in a statement.

"When we launched the Nokia E71 last year, we really set a new standard for just how compact a full QWERTY device could be. We have continued on this theme and have come back with the world's most compact messaging device, the Nokia E55. With the Nokia E55 we have made messaging as efficient and pocketable as possible. In our usage tests, the Nokia E55's compact QWERTY keyboard has been proven to be fast to learn and quicker to use than standard phone keypads."

Nokia also unveiled two new GPS phones at MWC, the 6710 Navigator and the 6720 Classic. Both sport a five megapixel camera and a soft touch surface.