It was only a matter of time before Vodafone jumped on the Google phone/ Android bandwagon and it has done so today with news of its HTC-based Magic handset. 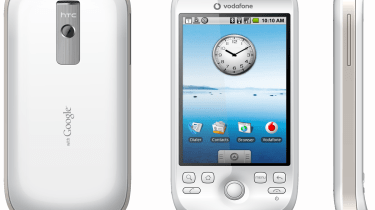 Vodafone today took the wraps of its first jointly created Google phone in the form of the HTC Magic.

The handset will launch this spring and initially be exclusive to the Vodafone network in the UK, France, Germany and Spain. Italian phone fans, on the other hand, will benefit from no such network tie in order to get their hands on the device.

Those keen to get a taste of the Android-powered HTC Magic, which positions the company head-to-head with rival T-Mobile's G1 handset, and has been created in partnership with HTC who yesterday launched a range of other touch screen phones will be able to register online for early information on pricing and availability specifics.

The HTC Magic Google phone will be made free on a number of price plans, according to Vodafone's official product announcement. It will boast a 3.2 inch QVGA display and, not unlike the G1, a trackball and navigation buttons for ease of access. Google Mail, IMAP and POP3 email will all be supported, as will Google Talk and instant messaging.

In addition to access to the application sweet shop that is the Android Market, the HTC Magic handset will also come bundled with an Android-optimised Webkit browser and support for Google Maps, Google Search and YouTube among others.

Colour-wise, the tablet-style device will be available in both white and black hues in Italy, just the latter tone in Germany and only white in the UK, France and Spain.

"Delivering an unbeatable mobile internet experience for our customers is a priority for Vodafone, so we are very excited to be introducing our first Android-powered smartphone in the spring," Patrick Chomet, global director of Vodafone's terminals arm, said in a statement.

"Following our joining of the Open Handset Alliance, we have worked very closely with HTC to bring this cool new phone to the market. Our customers want to access a wide range of the most attractive mobile devices to help them make the most of their time - the HTC Magic helps meet that need."