Aside from the new Google phone, HTC has unveiled two new Windows Mobile devices, the Touch Diamond2 and Touch Pro2. 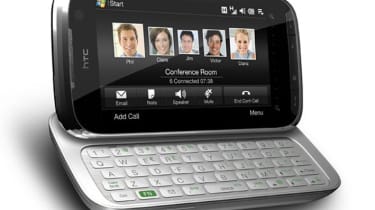 Aside from the soon-to-be unveiled Google phone the HTC Magic, the mobile phone manufacturer has revealed two new touchscreen handsets at the Mobile World Congress in Barcelona.

According to reports, HTC will today unveil the successor to the Google Android based G1 and rather than the expected G2 name, it will be dubbed the HTC Magic'.

In addition, HTC has officially announced the Touch Diamond2 and the Touch Pro2 - both of which use HTC's Touch Flo 3D interface. The handsets will be upgradable to Windows Mobile 6.5 when it released later in the year.

The former is the follow up to the Touch Diamond but actually more closely resembles the Touch HD.

It sports a 3.2in VGA display a 5-megapixel auto-focusing camera a gravity sensor, an ambient light sensor and a memory card slot for expanding the 288MB of on board memory. Best of all, HTC said it has extended the battery life to five hours, dealing with the Achilles heal of the first one.

The Touch Pro2 has a slide out keyboard of the Touch Pro, but retains the tilt function of the TyTn II. This has a 3.6in wide VGA display and has feature called Straight Talk' a sophisticated speakerphone that features, "asymmetric speakers and advanced noise suppression with full duplex acoustics". The speakerphone is also activated automatically when it's flipped over.

HTC said the Touch Diamond will be available in Q2 and the Touch Pro2 in the summer.