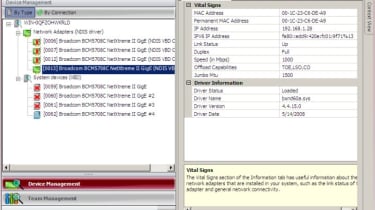 The chipset supports memory sparing and mirroring where the former reserves a memory bank and uses it to replace one that had encountered too many correctable errors. To use memory mirroring you need a minimum of sixteen identical modules installed. Mirroring is configured from the BIOS menu and once enabled splits available system memory in two and duplicates data across each half.

A Broadcom NetXtreme riser card, which slots into a proprietary slot on the motherboard and offers a quartet of Gigabit ports, handles the network connection. Usefully, Broadcom's ACS software is included, which can link multiple network ports together for redundant or load balanced teams.

Intel quotes a TDP of 130W for the X7450 processors and this made its mark in our power tests as our in-line power meter showed the system pulling 24W in standby and 488W with Windows Server 2008 running in idle. With SiSoft Sandra pushing all twenty-four cores to the max, consumption peaked at 778W.

We compared these results with a Fujitsu Siemens Primergy RX600 Sequipped with four 2.4GHz E7450 processors, with a TDP of 90W. With the server in standby we saw a draw of 22W, 419W with the OS idling and 660W with SiSoft Sandra running.

Dell's OpenManage suite provides a good range of server monitoring and management tools with the bootable ServerAssistant disk providing plenty of help with OS installation. You also get the new SUU (system update utility), which can be run within Windows where it checks the status of drivers and firmware and automatically updates them with the latest versions.

Basic remote access via a simple command line shell is facilitated by the embedded IPMI 2.0 chip but for KVM-over-IP services you'll need the optional DRAC 5 card. The DL580 G5 comes with HP's iLO2 chip, which provides these facilities as standard and also has optional power management tools. The Primergy RX600 S4 also offers these features as standard.

With the imminent launch of Intel's next generation Nehalem processors the big question is whether to wait for these. Nehalem introduces a completely new architecture, which includes features such as Intel's QuickPath Interconnect and integrated memory controllers. Nehalem is not an upgrade step as it isn't backward compatible with the 7400 series.

The first Nehalem servers are likely to be dual-socket 1U and 2U rack systems with the processors scaling from two to eight cores. Consequently, the R900 has plenty to offer as its twenty-four cores will offer a superior virtualization platform for some time to come and its enormous expansion potential will appeal to businesses looking for a highly scalable server solution.

The R900 delivers a high performance hardware package for the price making it a strong contender as an enterprise server virtualisation platform. Full remote server management is an optional extra but build quality and design are good and Dell teams this up with plenty of expansion potential.