A sneaky peak at yet another newly announced smartphone. This time it’s the HTC Touch Pro2’s turn in the spotlight. 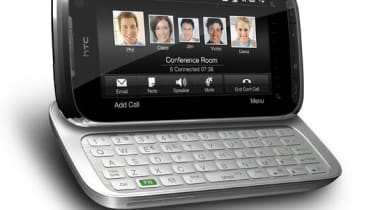 The Touch Pro2 is clearly aimed at a business audience. Our demonstrator said he'd had lots of positive feedback from delegates at the show who were keen not to have to wait too long to get their hands on the device. Our man in the know also said, as a flagship device, it should be available across all networks when it finally makes an appearance.

The handset felt quite heavy to us (it weighs in at 175g) and at 116 x 59.2 x 17.25mm, it's not the most svelte kid on the block. However, the casing is classy (the demo device was a mix of black and silver/grey, although the final colour may change slightly).

Our demonstrator was quick to point out that, size-wise, there's not much in it between the Touch Pro2 and the TyTN II. He added that those who had held onto their TyTN II devices and bypassed a move to the Touch Pro, would likely leap at the chance to upgrade to this modern iteration.

The handset makes use of the latest version of HTC's innovative TouchFLO 3D interface, which acts as a skin over Windows Mobile 6.1. Windows Mobile tends to have a marmite-like effect on business and consumers alike; you either love it or you hate it. From what we saw during our brief hands on, the new TouchFLO 3D software goes some way towards sweetening the bitter Windows pill for allergic users. Word is, you'll also be able to bag yourself an upgrade from Windows Mobile 6.1 to Windows 6.5 for mobiles when it comes out later in the year.

The Touch Pro2 we got our hands on was running alpha software so we were ready to easily forgive any quirks it served up. However, alpha or not, navigation was a brief, providing an easy-to-use, intuitive user experience. If that's what the alpha is capable of, we have high hopes for the final version of the software.

One new treat for users is the ability to view TouchFLO in landscape mode, which depending on what you're looking at can make quite a big difference to the whole experience.

Touch-wise, we found the 3.6in screen pretty responsive to our commands and the keyboard's keys were a good size too. Indeed, HTC says it has more tightly integrated Windows Mobile to enlarge touch focus areas so that they are much more "finger-touch friendly." It seems to be working.

Contacts and communications, as you'd expect, are high on the agenda. You're able to quickly and easily access all dealings (SMS, calls, email and so on) with a particular contact just by, quite literally, hitting them. This information is viewable whether you're in dialogue with the person at the time or not, which is a another nice touch if you're in a business call and need to find an email to refer to in a hurry.

You should also be able to (where supported by operators) quickly call a person just by tapping on their name in an email. That sounds awfully familiar to us. iPhone anyone?

Another neat feature for business users is the conference call mode. Simply place the handset face down on its screen and the loudspeaker will automatically kick in. The phone makes use of so-called Straight Talk technology, which promises crystal clear audio quality and noise cancellation features.

If you want to add any new parties to the call, you can do so easily particularly if they happen to be in the cc line of an email and muting one or more people so you can privately discuss what you really think of them behind their back is also a cinch.

The HTC Touch Pro2 also features HTC's Push Internet technology. We didn't get time to take this aspect of the device for a test drive, although HTC claims that the technology alleviates slow downloading and rendering of mobile web pages on a mobile phone. Again, yet another potential boon for the business community.

Battery life is pretty good, with talk time being quoted as up to 419 minutes. In standby, the Touch Pro2 offers up to 348 hours.

All in all, the HTC Touch Pro2 is not a device for the light pocketed among us. Those who want comfort over style or substance may shy away from this fairly hefty device. However, others may be attracted to the fact that it packs a fair bit of business acumen and isn't likely to break as soon as you drop it or open it more than once.

Take a look at the hands-on video preview below filmed by our good friends over at sister title Know Your Mobile.

We like what we saw, even if it was running an alpha version of the software, and we’re keen to see more of the device in the future. Its Windows Mobile roots won’t be to everyone’s liking, but once you get over that, it’s a valuable weapon that many a business user will wield in the future.