Netgear's DGN2000 offers draft-n wireless at an appealing price, but are the performance and features good enough for the business user? 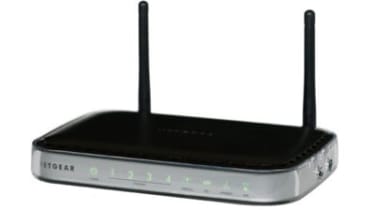 You'll probably want to use the router as a DHCP server to automatically assign local IP addresses to every device that connects to the network. However, if your office uses a network printer, NAS device or file server, you'll want their addresses to remain static, rather than changing every time they're connected. You can assign fixed IP addresses in the router's Advanced LAN Setup, where you can simply select any device currently connected to the network or manually enter the MAC address and desired IP of any device you wish to assign a static address to.

The DGN2000 enables you to implement MAC filtering through its Wireless Station Access List. When Access Control is enabled, only wireless devices on your trusted list will be able to connect to the router. This is by no means foolproof security but it's an additional line of defence. Of course, you'll need more than this to secure your wireless network against intruders. The router supports 64-bit and 128-bit WEP, WPA-PSK and WPA2-PSK encryption, as well as WPA-802.1x, which authenticates connection attempts against a RADIUS server located elsewhere on the LAN.

Its wireless transfer speeds were good. Tests using ours Centrino 2 notebook produced particularly strong results when compared to other wireless routers, like Belkin's similarly priced N+ Wireless ADSL Router. We were particularly impressed by a 22.3Mbit/s transfer speed at a distance of 25m, which means that this router should be powerful enough to provide fast and stable wireless access to users across even large offices.

Like all Certified 802.11 Draft N routers, the DGN2000's wireless radio is set to use only a single channel by default, which limits its speed to 130Mbit/s. We enabled channel bonding by switching to 270Mbit/s mode in the router's Wireless Settings. This produced speeds of 58.6Mbit/s at a distance of 15m when we used a Netgear RangeMax Wireless-N USB adaptor, compared to 51.4Mbit/s with channel-bonding disabled. However, channel-bonding can result in a less stable wireless signal that is more prone to interference. We were unable to get a consistent signal in channel-bonding mode at 25m. Fortunately, the practical speed difference between the two modes is negligible.

The DGN2000 provides enough security for business use and we were pleased by its range of security alert, logging and diagnostic options. However, it lacks a number of features that some businesses will class as essentials, like built-in VPN tunnelling capabilities, IPsec and support for multiple SSIDs and guest logins.

What's more, the absence of Gigabit Ethernet could be a serious problem for businesses that shunt large amounts of data across their local network. This is disappointing given that almost all small enterprise NAS equipment supports 10/100/1000 Ethernet but is sadly typical of an ADSL router. Although almost every cable router on the market has Gigabit, only a handful of more expensive ADSL devices do, like Belkin's N1 Vision, Netgear's DG834N and Billion's more business-oriented BiPAC 7402NX, which also has support for VPN tunnelling and a 3G failover. However, these are more than twice the price of the DGN2000 and neither performed as well in our wireless speed tests over distances of 25m.

If affordability, a well designed interface and good wireless performance are your main priorities, then the DGN2000 is a good choice, but if you require more advanced features and Gigabit networking, you should look elsewhere.