Analysis: DEMO not what it used to be

The bi-annual emerging technology DEMO conference is suffering from fallout in numbers much like many other trade shows in the industry. 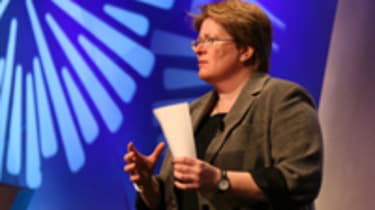 From the start, DEMO 09 executive producer Chris Shipley admitted that the bi-annual emerging technology conference wasn't what it used to be.

At a desert resort where some 69 companies debuted their latest and greatest tech last winter, an anemic 39 presenters faced six minutes each in the spotlight. Word-of-mouth indicated that as many as one-third of them signed up for DEMO only in the last few weeks, a sign of last-minute decisions that previously were unthinkable in the event's 18-year history. And where more than 700 venture capitalists, entrepreneurs and media representatives filled a sizable ballroom in 2008, fewer than 500 lined the tables in a carefully cordoned-off conference hall.

It is what Shipley calls "a reset year," because "there's nothing like a recession to clear out the clutter."

This is quite a reset. American venture capital funding plunged from $4.5 billion invested in 466 companies in January 2008 to less than $1.3 billion invested in 203 companies in January 2009, according to Thomson Reuters data. Where companies once touted the number of eyeballs they could attract, arguing that revenues surely would follow, today's entrepreneurs immediately bring up phrases like "scalable business model" and "capital efficiency" as they reveal their wares.

Even DEMO itself is resetting its operations. Shipley, a 13-year veteran of the DEMO stage, announced late last month that she will step aside after the coming autumn conference in September. She plans to hand the reins to Matt Marshall, editor-in-chief and founder of VentureBeat, a news site focusing on private companies and the capital that backs them.

Muttering abounded over the course of the two-day show that this might well be the end of DEMO. With increasing pressure from competing shows - such as the upstart TechCrunch50 conference in San Francisco intentionally scheduled to conflict with DEMO - the venerable start-up stage assuredly has seen better days.

But the conference itself is adjusting to the changing world around it. Previously, the bulk of DEMO presenters came from Silicon Valley and the greater San Francisco Bay Area. Now, however, half the presenting companies are from outside California, with at least half a dozen of them from other countries. That alone means that DEMO remains the go-to conference for those looking to see the latest and greatest that technology's wunderkind have to offer. Fewer presenters didn't translate into fewer potential winners. Instead, those that were able to raise the $20,000-plus fee to present seemed all the more focused on cash flow and a clear path to profitability.

Speaking on a venture capitalists' panel, investor Christine Herron of First Round Capital praised the refreshing thriftiness that has come to the fore in recent months. "There's a suspension of disbelief that goes into start-ups," she said. "You have to have a certain Pollyanna vision . . . if you're going to quit your job, anger your spouse and work 14-hour days."

And there were indeed diamonds in the rough at DEMO this time around. Hardware innovations were debuted there, including Always Innovating's intriguing Touch Book computer, Qualcomm's low-energy Mirasol displays and Avaak's polished and simple in-home video surveillance system. But there also were a number of must-get and must-try applications that came to the stage.

Among the best were:

Symantec's Project Guru, a web-based console that lets IT professionals remotely manage the constant demands of befuddled friends and family. No time to help, or simply can't puzzle out everyone else's computer problems? For a fee, they can hire a Symantec NortonLive professional on the spot.

For the moment, Asurion's Mobile Address Book is only available on phones running Google's Android operating system. But its smooth merger of address book, social media, photos and even games will soon be on an iPhone near you.

eFormic's CO2Code coordinates a database of UPC codes that shows the carbon emissions for a vast array of consumer products. Total up your carbon emissions, buy the appropriate offsets on the eFormic's site and know that you're doing your part to keep the world green.

Ensembli's modified RSS reader, still in beta, mines copious data about what you read to refine its guesses about what you'll want to see in the future. Combine that with semantic and behavioural analyses of other users and Ensembli draws eerily accurate lists of suggested content.

Speaking of looking at others' choices to refine your own, Xmarks (formerly known as Foxmarks) not only lets you manage and backup your bookmarks in the browser Firefox, but also guides users to the sites most commonly bookmarked by others. That accomplishes two things: if a site is bookmarked, the users who did so must trust that it's a reputable site. And if those bookmarks are sorted into folders, Xmarks then can detect which sites most likely are related to one another. It's the semantic Web finally coming to fruition.

And speaking of semantics, Evri offers up aggregated pages that quickly identify new people, places and things. As a toolbar, that contextual information now can follow a user from site to site, helping to filter through the daily morass of data.

Whether any of these companies will still be around in a year is anyone's guess. But just making it DEMO and surviving six nerve-wracking minutes in the spotlight gets each of them that much closer to making it.