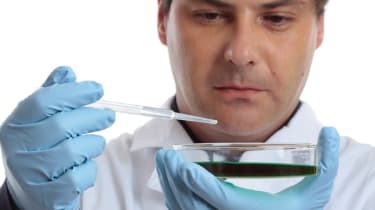 US President Barack Obama unlocked the fetters on billions of dollars in federal research spending yesterday when he lifted former President Bush's August 2001 ban on embryonic stem cell research, saying it was time to "make up for lost ground."

Obama's move is likely to stimulate renewed focus on the technology needed to support such high-level research efforts.

Under the economic stimulus package that Obama signed last month, the National Institutes of Health will get $10 billion in federal funding over two years, most of which will be released as research grants. With a sizable chunk of those billions now being approved for stem cell research, manufacturers are eager to start selling the technology that will be required to operate the new spate of complex research labs.

"Promoting science isn't just about providing resources, it is also about protecting free and open inquiry,'' Obama said during the signing ceremony.

His action, which angered abortion opponents, reverses Bush's executive policy that banned federal funding for research on embryonic stem lines created after August 9, 2001. While Bush Administration officials insisted that the restrictions still would leave more than 60 lines of cells for researchers to continue their work, most of those - some scientists allege all of those - were contaminated or otherwise unusable.

Bush's policies resulted in sometimes absurd efforts to keep privately funded work separate from publicly funded work. In one laboratory, a line was drawn on the floor to separate private equipment and personnel from their public counterparts. In another facility, yellow police tape was strung up to cordon off the privately-funded sections.

The controversy swirling around embryonic stem cells arises from the debate over when, exactly, human life begins. Embryonic stem cells are extracted from five-day-old blastocysts, microscopic balls of fewer than 100 cells that make up the initial stage of an embryo's development prior to its implantation in the uterus. Because the cells are "undifferentiated" - they haven't yet begun to develop into specific tissues such as neurons or heart muscle or blood cells - scientists are studying them to determine whether they can be programmed to re-grow damaged or diseased tissue in adults and children.

California, New York and half a dozen other states that funded human embryonic stem cell research during the era of federal restrictions appear best positioned to benefit from the new grants. California's efforts were the most extensive, with voters there approving a 2004 ballot measure to provide $3 billion in funding for stem cell research. The state already has awarded $635 million in research and facility construction grants, giving it a competitive advantage over less-advanced regions. In addition, New York's Empire State Stem Cell Trust in 2007 began offering $600 million to fund stem cell research.

Perhaps best known for his role as Superman, actor Christopher Reeve was a staunch supporter of the potential gains of stem cell research. As such, the Christopher & Dana Reeve Foundation welcomed Obama's decision.

"With a stroke of his pen, President Obama acknowledged the will of the majority of Americans and harnessed the power of the federal government to move research forward," said Peter T. Wilderotter, the foundation's president and chief executive, in a statement.

"By removing politics from science, President Obama has freed researchers to explore these remarkable stem cells, learn from them and possibly develop effective therapies using them. We are extremely gratified for President Obama's action on this important issue."