The Linutop 2 is one of the smallest PCs on the planet. We examine its potential as a cheap client system. 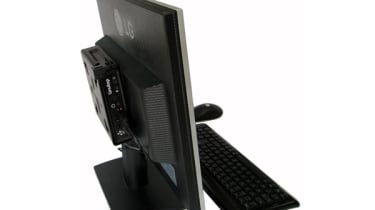 If you're looking for an exceptionally compact and frugal client PC, or even a low-power server for very light duties, the Linutop2 is an interesting prospect.

It measure a tiny 140 x 140 x 35mm and it's completely solid-state with no moving parts at all. It's so small, in fact, that Linutop recommends mounting it on the back of a monitor, and it sells a bracket at 38 for the very purpose. The unit itself is also sold in packs of six at 1,560.

With no moving parts and passive cooling it's silent in operation, and its power consumption is extremely low, with a rating of a mere 8W. That's half as much as the average home broadband router.

Inside the Linutop2 you'll find a relatively niche hardware platform in the shape of an AMD Geode processor and accompanying chipset. The Linutop2 improves on its forebear by sporting 512MB RAM, plus 1GB flash storage to the old model's 256MB with no integral drive. Connections on the metal case extend to four front USB ports, a power button, mic in, headphones out, audio line out and of course 10/100 Ethernet and analogue VGA output. There's also a very small internal speaker for basic audio cues.

With such limited mass storage capacity, Windows isn't an option: the Linutop2 comes with a customised Linux 2.4 installation based on Ubuntu and known as Linutop OS 2.4.

For a Linux system it's very straightforward to get it up and running though. It boots to a desktop running the lightweight xfce window manager, with Firefox and OpenOffice plus a few other Linux standard apps like the Pidgin IM client all ready to go.

More important, it has a neat custom configuration utility aimed at enabling the system to run as an appliance. To that end you can configure it to boot straight into your chosen application and, for instance, run a video on infinite loop. The ever-popular VideoLAN video player application is pre-installed for the purpose.

The second market the Linutop is aimed at is public-access internet terminals. Again, the configuration utility is set up for the job, with the option to put the OS into Linutop lock', which drops the desktop into password-protected xfce kiosk mode with no changes to the OS allowed at all by users. You can also choose data persistence to run across the board, or apply to user data only, allowing the operating system to roll back to its previous state whenever the machine is rebooted.

The major drawback of using a Linutop in the role of a marketing display appliance though is its lack of CPU horsepower. With the 800MHz Geode having roughly the same processing power as a Pentium III, It doesn't have the grunt to run video at HD resolutions.